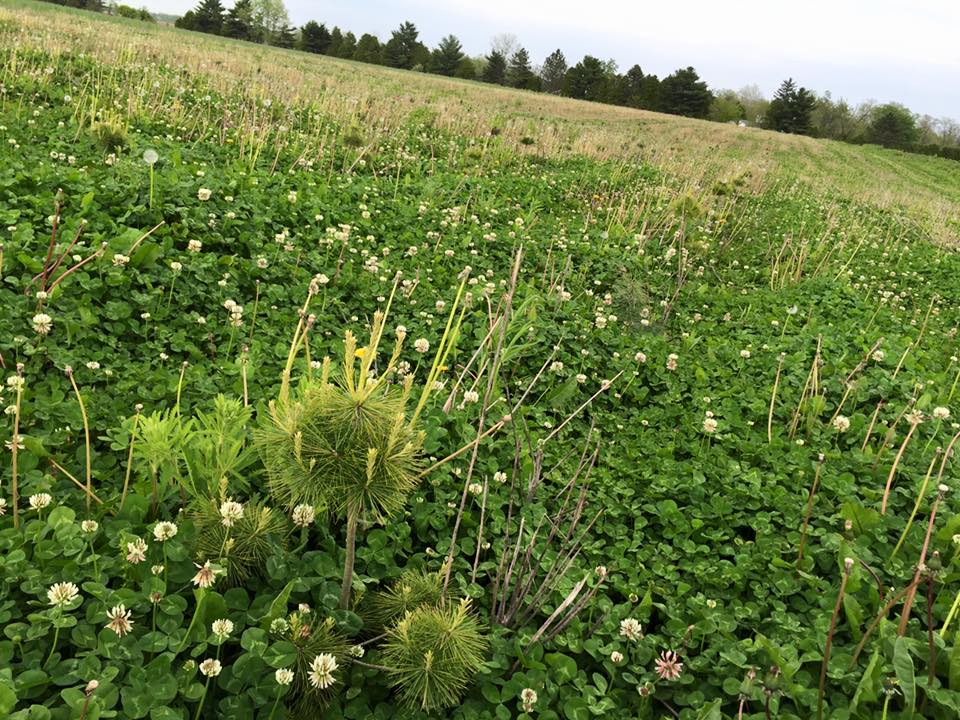 After the trees are planted in the spring, a major source of summer labor on my family’s Christmas tree farm is weed control.

Weeds can rob young trees of exposure to sunlight, moisture and nutrients. The first year of planting trees on the farm (many years ago) we did not emphasize weed control and lost nearly the entire crop.

Since then my dad, brothers and I have spent countless hot, buggy, summer hours mowing between trees. This is most important in the youngest trees, which are also the easiest to mow off while riding on a mower. Imagine looking for an 8-inch tall tree in 8-foot tall weeds. Mowing takes considerable time and fuel and can also cause significant damage to larger trees by breaking branches and scarring the trunks. We do some spraying, which helps, but there are drawbacks and limits with that weed control method as well.

smother weeds while allowing even the smallest trees exposure to the sun. The thick clover also holds in moisture, keeps the soil cooler and fixes nitrogen, all of which can benefit the trees.

We seeded the clover in spring of 2015 for both the 2015 and 2016 tree crops. In the first year (last year) the clover got established, but the weeds still required regular mowing. This year, though, the clover seems to have really filled in and looks to be doing what it is supposed to do. So far, about the only plants competing with the clover are the dandelions, which are not a huge issue around the trees.

The clover has the potential to save tremendous time and money if the clover eliminates the need for majority of the mowing and spraying. It could also really improve the quality and survival rate of the tree crop. I am very interested to see how the weed control holds up through the rest of the growing season and in coming years.