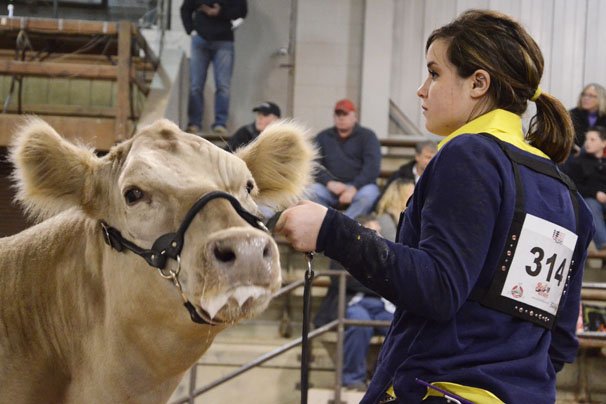 The 2016 Ohio Beef Expo kicked off on Friday. It’s certainly one of the most popular events for Ohio cattlemen to attend. This event attracts over 30,000 participants from 25 states and Canada each year. The Expo included breed sales, shows and displays, educational events, a highly competitive junior show and a trade show with over 140 exhibitors.

This annual event, coordinated by the Ohio Cattlemen’s Association, included breed sales, shows and displays, trade show and a highly competitive junior show. This year’s junior show was the largest ever with more than 850 junior heifers and steers and more than 450 exhibitors competing in showmanship.

Each day was filled with many activities for a wide variety of interests. Sires of several different breeds were on display at the Genetic Pathway throughout the event. Breed shows and parades were held for Angus, Hereford, Miniature Hereford, Murray Grey, and Shorthorns. Other Friday highlights included a Nutrition Seminar and the Junior Show Welcome Party and Fitting Demonstration.

The Saturday schedule was full of activity. Breed sales held included Angus, Hereford, Maine-Anjou, Shorthorn, and Simmental. Junior activities included a judging contest, a Beef Quality Assurance Program, and the Junior Show Showmanship Contest. The Trade Show and Genetic Pathway were open as well. Sunday is the final day of the event. The highlight of the day was the Junior Heifer and Steer Show.

For more results from the Ohio Beef Expo, go to: http://www.ohiobeefexpo.com/