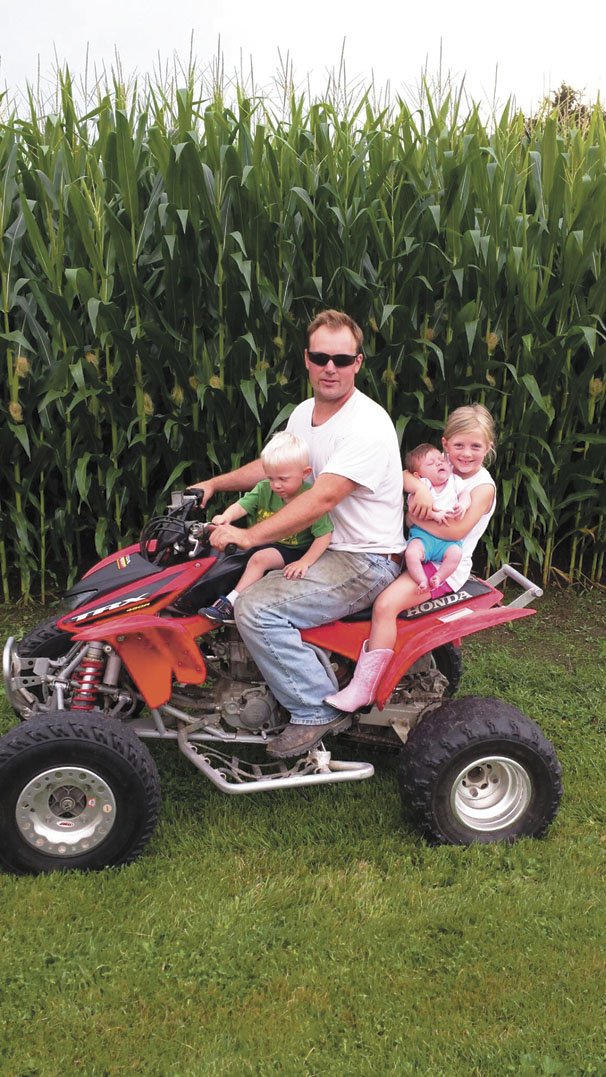 For the Smiths of Huron County, scouting crops is a family affair. Last summer, Adam Smith had plenty of help with his contest-winning field that produced 289.5824 bushels. Photo provided by Smith.

Big yields and a bright future for Smith of Huron County

With the 2016 growing season just getting started, it is worth taking one last look at the factors for success in a big yielding 2015 corn field.

Adam Smith is a young farmer and does not farm a huge number of acres, but he carefully manages his corn ground to maximize productivity with the available resources of his nearly 800-acre Huron County farm. That is one reason he logged the highest verified Ohio yield in the National Corn Growers Association 2015 National Corn Yield Contest.

The south central Huron County field that produced the winning yield is right where he lives and fairly hilly.

“The dirt I farm behind my house that won the contest is fairly gravelly. It is drained well. There is good soil in pockets,” he said. “It is highly variable. The winning field is very sandy in the front, to almost a gumbo in the back. In the valleys it is black, heavier clay and the tops of the hills are sandy and gravelly. That farm is very hilly, but on average the ground I farm has 2% to 3% slope on a lot of the ground.

“If I feel like I have a compaction problem I’ll go in with a ripper in that spot in the fall, but I generally only do fall tillage in maybe one field if it needs it. I try to no-till a field or two of corn and basically all of my beans. I will till my earlier corn fields and no-till my later corn.”

The contest-winning field has a history of good corn production.

“The year before it was in beans. The field has always done well. There is a lot of tile. In the wetter areas there is 20-foot spacing, and it is generally on a 40-foot spacing,” Smith said. “When I bought my seed for the 2015 field, I was talking to my DEKALB rep and asked him about the best hybrids. He said that if I didn’t mind planting a really full season corn, the 6489 is about the best for top end yield. It is a double stack with the corn borer above ground protection and Roundup. It is a VT Double PRO RIB. The seed was treated with Poncho fungicide and then I did run Capture, which is an insecticide. The one field where I did not use Capture had some black cutworm damage and I think it helped the stand.”

The corn was planted with Smith’s John Deere 1770 NT and the contest field was the first one planted in the spring of 2015.

“There were a lot of guys planting before I started but I felt like the ground was too cold and damp and there were some cold nights. The subsoil was full of moisture. I like the subsoil to dry out to avoid compacting it. I wanted to put out a test plot also,” Smith said. “My thinking was that I would get started and get my test plot out of the way and go on to plant the rest of my corn. I started with my test plot on May 2 and I planted about half the contest entry that day in the same field. I planted the rest the following day. Then it was dry all of May. I had everything planted, sprayed and sidedressed by May 29. We got three inches of rain on May 30, which is the day our daughter was born.”

“I spoon feed the plants by putting down fertilizer three to four times a year to feed the plants as they need it and keep from losing it. I like all of my dry fertility right ahead of planting and I like to fit in it. I dry spread potash and phosphorus, so DAP and potash. I also put down some ammonium sulfate for sulfur. I till it as lightly as I can with a regular disk and I let it dry and in that field I did another pass with a soil finisher,” Smith said. “I did a straight rate of potash at 200 pounds, the actual K would be 120 pounds. Then I can straight rate my ammonium sulfate at 150 pounds. I did use variable for the phosphorus and it was 0 to 300 pounds based on what it needed. I put liquid fertilizer down with the planter two by two. I am running about 9 gallons an acre of 10-34-0. I also put pop-up in furrow — a low salt fertilizer. I put fertilizer on the seed, near the seed, beside the seed and in the field.

“I think I lacked a little nitrogen in the fall. I was starting to see some yellow in the middle of the lower leaves, but the top of the plant stayed green and the ear leaf stayed green. I probably should have put on more N. I put on 240 pounds of actual N total, so I had a decent N efficiency use ratio. I do run an N stabilizer in my ammonia and in my two by two also.”

For sidedressing, Smith tries to get back in fields as quickly as possible after planting.

“I like to get in for sidedressing ammonia when the corn is maybe five or six inches tall at V3 or V4. That way you’re not tromping through a lot on the headlands and what you do run over springs back. When the corn gets bigger you can kill it or turn it into a sucker plant. I try to get back in it as early as I can.”

The growing season got off to a great start with nearly ideal planting conditions after the long cold winter of 2014-2015. The early May start to planting was fairly typical for the area.
“After I planted I kept thinking we’d get rain and I needed to keep moving along. But we didn’t get any rain the whole month until the last day on May 30. I had everything planted, sprayed and sidedressed by May 29 and we got three inches of rain. It started off fairly nice and rained all through the night. I had a few small areas of ponding, but the water got off quickly before it killed the corn,” Smith said. “Then in

about a week we got about six inches of rain. I like planting into dry soil and not getting rain before it emerges. Then you don’t have a crust to work through. It had a great start.”

After plenty of moisture, another window opened up to get in the fields.

“We went a week or two in June where things started to dry up. The heavy rain that we got splashed a lot of dirt up on the plants, so I came back and did spray a half rate of fungicide at around V8 or V9. I did a leaf test and it said my zinc, boron and manganese were low. I ended up putting on a little manganese and boron. I sprayed some Roundup because I had some foxtail coming and there was some small giant ragweed to cleanup,” Smith said. “Then we got another three inches of rain at the end of June. I would say we had between nine and 12 inches of rain that month, but in July when we went to pollinate it was fairly dry. We got a couple of light showers, but the silk wasn’t all the way out of the husks and I was worried that it wasn’t going to pollinate well. Then we got about six tenths of an inch of rain and it was just enough to push that silk out that pollinated five or six days later. Evidently there were a few anthers that hadn’t shot pollen yet and that really helped. If there was any water stress it was then in the middle of July.”

The early moisture did lead to some issues with diseases.

“There was disease pressure in different fields around the neighborhood with gray leaf spot and northern corn leaf blight. I don’t normally like to put a fungicide on at tassel because I have a fear of hurting the pollination. The corn plant is very sensitive to surfactants during pollination,” Smith said. “At brown silk or blister I decided to fly on a fungicide application. It was so calm when we did it and there was really good canopy penetration. I had coverage all the way down to the lower leaves. We ran an InterLock adjuvant. It controls your droplet size better.”

From there the weather finished out strong — an important part of a good growing year for the long season hybrid.

“We had nice rains in August and early September and the winning corn had a fairly sizeable ear set. A lot of them were 16 or 18 around. That hybrid is noted as a strong finisher. The weather in August and September really contributed to the yield a lot. The kernels just kept getting deeper. I black layered the last week of September or the first week of October. I planted 38,000 and ended up with a population around 37,500,” Smith said. “That field was harvested on the 10th or 15th of Oct. I opened the field and we did the test plot and then we harvested for the yield contest and got 289.5824 bushels. It was the first field we harvested. We knew it was going to be somewhere between 250 and 300 bushels based on the ear counts. The second entry we weighed was 307 bushels, but I didn’t have the two extra judges needed to verify yields that are over 300 bushels so I couldn’t enter that re-check.”

After steady moisture through most of the season, harvest conditions were dry and ideal.

“At harvest I could not believe how dry the grain was. The whole field had to be right around 20% moisture, maybe 21%. For 114-day corn it was really dry. Normally with 114- and 110-day corn, my drier gets a workout,” he said. “The field conditions were dry too, which really helped for a nice harvest. The corn in a few places was starting to fall down a little bit. Since the corn was dry we hustled along as fast as we could. I got a lot of it before it did fall down, but there were some problems with stalk quality at the end of the season.”

In the end, Smith’s 2015 corn averaged around 225-bushels across the farm, all possible with the help of his wife, Lanay, and some hired help during the busy planting and harvest seasons.

“I hope to keep entering the contest and improving on what I’m doing. My wife, my hired help and my crop advisor make a big difference. My father gave me the love of growing corn and a start and God brought the good weather.”