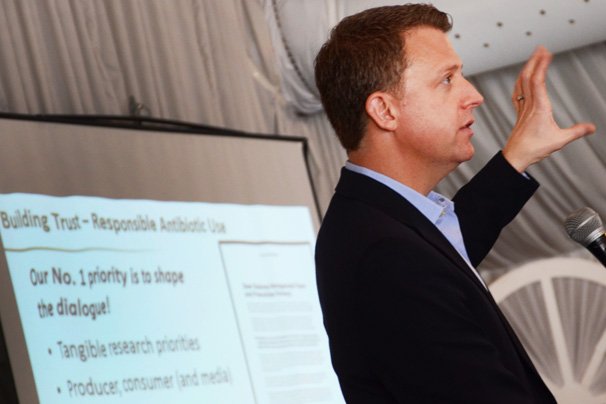 Jarred Sutton with the National Pork Board

Exhibitors were overflowing the booth space and attendees crowded the hallways at the 2016 Ohio Pork Congress. Attendees got to hear from Jarred Sutton with the National Pork Board about the work going on at the national level to promote pork.

“The production and expansion of our industry is hitting record numbers and we had a pretty good slow down in our international marketing due to the strength of the U.S. dollar and the challenges with the West Coast ports. Exports were up around 27% of our production and had dropped down to 20% or 21%, but it has ticked back up. We are looking for around 25% in 2016 and we’ll continue to build on that. Our focus is on Asia and Latin America. Those are growing economies with a demand for pork,” Sutton said. “Domestically our demand has held strong. Our team has worked really hard to promote the product and make sure our consumers know they have a great quality product as an option for dinner tonight. That is a major priority for us this year because there is a lot of product headed our way.”

Addressing concerns about hormones (which are not permitted in pork production) and antibiotic use are high priorities for consumer education.

“Everyone seems to be talking about responsible antibiotic use and I have had a lot of conversations about exactly what that means. For the pork industry we have a great story to tell and share with those who are interested,” Sutton said. “There is a big segment of consumers who love pork and love experimenting with pork. We are doing our best to make sure they are less intimidated by our product. Nearly every fast food menu had pulled pork on the menu in the back half of 2015. That helps show consumers there are new ways to use our product.”

As always Ohio Pork Council award winners were highlighted at the event as well. 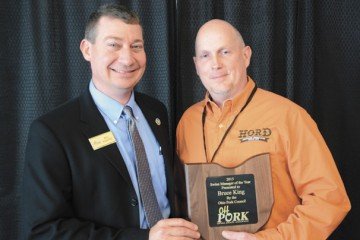 The Swine Manager of the Year Award recognizes an individual who excels in the management of a swine operation, is extremely knowledgeable of the pork industry and has demonstrated the ability to make key decisions for their operation. The Ohio Pork Council is proud to recognize this year’s Swine Manager of the Year Award recipient, Bruce King of Lucas

Like many, King was first introduced to agriculture through spending his summers working on neighboring family farms during high school. Following high school, Bruce enlisted in the United States Marine Corps and left the state. Upon his return to Ohio, he took a manufacturing job, where he remained for 15 years.

Looking for a change, King decided to respond to a help wanted ad he found in a local newspaper; this ad led him to Oberholtzer Hog Corporation, a 1,200-head sow unit contracted with Hord Livestock, one of the state’s leading pork producers. 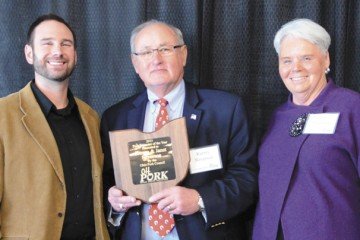 The Stiversons have been involved with Ohio Pork Council activities for more than 30 years, their most visible effort being serving as managers of the Ohio State Fair pork stands. Each year, at the Ohio State Fair, Kenny cooks more than 3,000 pounds of pork and Janet manages the inside of the stand. Kenny also served on the OPC board for 10 years, including his term as president in the early 90s.

Throughout the year, Kenny and Janet cook and serve pork for a variety of occasions and events, including the Pork Chop Golf Outing, the Ohio House and Senate Swearing-In Ceremonies, numerous political and charitable organization fundraisers, their local Farm Credit’s annual customer appreciation dinner, many weddings and graduations, and a well-known tailgate party at each home game of the Ohio State Buckeyes football team. Focused on promoting the product and encouraging proper cooking temperature and preparation, the Stiversons cook and serve more than 9,000 pounds of pork each year

The Stiversons are very active citizens of Marion County. Kenny worked for 40 years at the Whirlpool Corporation and now serves as a Marion County Commissioner. He also worked in selection and quality for Hord Livestock for four years. Janet worked as assistant treasurer for River Valley Local Schools for more than 30 years. 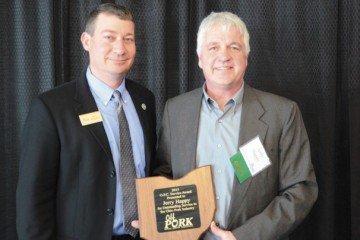 Jerry Happy very much enjoys the opportunity to work with those involved in Ohio’s pork industry, helping to find progressive solutions to issues and build on the success of a thriving industry. Jerry makes himself available as a resource and has worked alongside Dale Ricker with Ohio State University Extension to provide valuable swine ventilation workshops for more than 15 years.

Happy served as OPC’s Associate Director for four years and continues to participate in events and remain actively involved in the Demand Enhancement, Pork Congress and Buckeye Bacon Bash committees.

Those who know Happy can attest to his ability to have a good time and make everyone else do the same. Often, he uses this talent to promote pork by way of entertaining barbecues and memorable events. 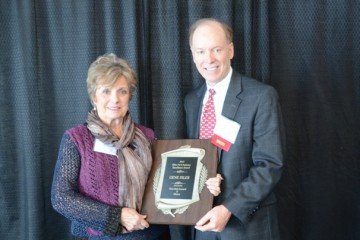 The late Gene Isler spent the better part of his life contributing to and working to enhance Ohio’s pork industry.

For 23 years, Isler served Ohio’s pork industry as a swine Extension specialist and professor for The Ohio State University. During his career with the University, Isler supervised educational programs, managed boar test sales for the Ohio Swine Evaluation Station, taught AI and farrowing workshops, and coordinated the Swine Breeders Roundtable for Ohio hog farms. Isler also served as the secretary and treasurer for the Ohio Pork Improvement Association, and president and secretary of the Ohio Duroc Breeders Association. He also served on the Ohio Department of Agriculture’s swine health committee and the Ohio Pork Council’s research, producer education and swine health committees. On a national level, Isler served as director of the board and president for the American Yorkshire Club, and served on the board of directors for the National Swine Improvement Federation.

Isler was a partner in Isler Genetics for 45 years, where the operation consisted of 400 sows producing Durocs, Hampshires, Yorkshires and crossbred seed stock and show pigs. He was also a partner in several additional commercial swine farms.

Highly regarded for his ability to evaluate livestock, Isler spent a great deal of time judging hog shows. He judged at county fair across Ohio, and state fairs and major swine shows spanning not only the United States but Japan, Brazil, Argentina and Canada as well.

Isler was very supportive of youth, mentoring many 4-H and FFA members with their swine projects. He also served as assistant swine superintendent at the Ohio State Fair.

Isler’s contributions to the swine industry did not go unnoticed. He was recognized as Breeder of the Year, three times, by the National Duroc Swine Registry, and once by the National Swine Improvement Association. In 2015, he was posthumously inducted into the Ohio State Fair Hall of Fame.

Gene Isler was an innovative thinker, dedicated to improving the pork industry and the Ohio Pork Council is pleased to honor him with the 2016 Pork Industry Excellence Award.