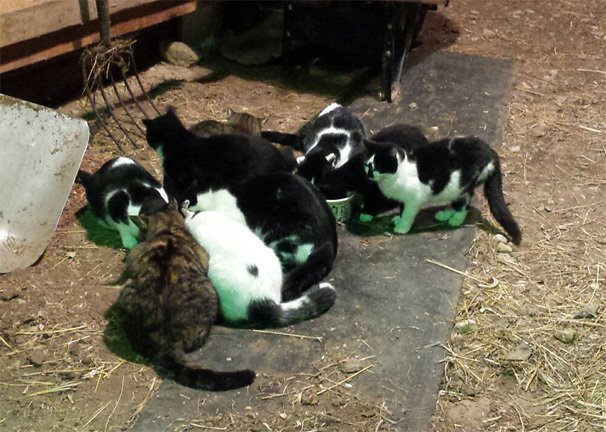 Feral cats — The unwelcomed adventure that became a blessing

Cats are an important element in my barn. I always like to keep between three and five around to keep the vermin numbers under control. My barn cats are all spayed or neutered and well fed, and although I occasionally pet them, they are mostly independent creatures that care more about bringing “presents” in the form of dead rodents to their roommates, my pygmy goats, than they do paying attention to me. That’s fine by me. I hate rodents of all kinds so the arrangement works out nicely.

For nearly 10 years, I kept my cat numbers low and had minimal losses to my cat population. I considered myself lucky none of my cats had disappeared mysteriously and that none had been hit on the road. I was also thankful that no feral cats had found their way to my barn. That all changed in the fall of 2014.

Last fall, three recently weaned feral kittens claimed my barn as their own. I didn’t mind too much because my cats were older and probably reaching the end of their lifespan, but I didn’t want more than the three additional ferals. The question was, how was I ever going to have a veterinarian spay or neuter cats that I couldn’t touch, let alone catch.

I tried to tame the kittens during the winter of 2015. I even set up an appointment to have them spayed or neutered in May of 2015, but alas, the female had three kittens the week before the appointment, and I was unable to catch the other two when the day came. My feral cat population had just doubled, and I still didn’t have a plan in place to keep them from growing further. I like kittens and don’t mind if folks decide to have numerous barn cats, but my land and barn size along with my own wish to keep cat numbers down made it necessary to take some action quickly.

After talking with some friends, I finally found a local group that helps trap and spay or neuter feral cats.  With a few lessons and helpful hints from this groups’ members, I was able to successfully trap all three of the now adult feral cats and have them spayed or neutered this past summer. I had to wait for a few months for the kittens to grow before they would be ready for surgery.

Summer turned to fall, and it was now time for the new kittens’ surgery, but my husband and I had bought a new home and we were trying to move. Now what?

I talked to the volunteers that helped me learn to trap the ferals, and it became clear that retrapping and relocating all the cats was not going to be easy. There were 11 now  (four were mine, three original ferals, three new kitten ferals and one bonus feral that decided to show up). None of them showed any signs of finding another home, and I didn’t want to leave them to be someone else’s problem. After all, I was going to need barn cats at my new home anyway. Apparently, feral cats are much harder to trap a second time, and they often don’t relocate well. After much discussion, it became clear I had to at least attempt to move the cats, but the volunteers that work with feral cats on a regular basis doubted the cats would stay at the new barn even if I were able to move them all.

I was very lucky on the first two days of the move to catch several cats. I put large dog crates in the barn overnight the day before I was going to attempt to catch the cats. The day of the move, I placed cat food in the crates. Several cats went into the crates, and I simply shut the doors. I was also able to pick up and carry several of my tamer cats and place them directly in carriers.

Four cats were hardier to catch. It took several days for two of the feral kittens to finally decide to go in a crate and for me to be quick enough to shut the door before they could escape. I had to set traps for the last two adult feral cats.

Despite all the set backs, I was able to move all 11 cats in the course of three or four days. I shut the barn up at the new place and took a few of the cats’ goat friends over ahead of time so the cats would feel more comfortable in their new home.

After relocating the cats, I left the barn shut for several days and went out several times a day to feed and water the cats and check on them. The barn has now been open for quite some time, and I see all the cats daily, which makes me think they are enjoying their new home and are hopefully going to stay around.

I realize that I was very fortunate to have such good luck and that not all feral cat relocations go as smoothly as mine did. I’m also thankful that I was able to move the cats without injury. Do not underestimate the viciousness that can come from even cute little kittens when they are cornered or caught. Cats can carry disease so it is important to take extreme caution when handling or trapping them.

If you ever need to catch cats — especially feral ones — here are some tips. Some folks would probably say feral cats aren’t worth all this effort, but to me it was a worthwhile endeavor. Eleven cats may be more cats than I originally wanted, but so far they are keeping my barn vermin free, and it was over run with mice when I first moved to the property. Also, a couple of the cats have warmed up to me and are now my companions when it is time to feed the rest of the livestock.

Hopefully, the cats stay around, healthy and out of trouble so my cat trapping adventure continues to be a success, because though they were originally unwanted, the fantastic hunting skills of these feral cats have turned out to be a blessing in disguise.