During the past few years agronomists and university weed experts have been discussing the potential northern movement of an aggressive weed that can reduce yields and increase costs of weed control. The arrival of Palmer Amaranth, nicknamed “Pigweed on Steroids”, has been confirmed in multiple states across the Eastern Corn Belt. Seed Consultants’ customers and agronomists have already worked together this year to deal with new populations of Palmer that were discovered this spring. Palmer amaranth populations have recently been confirmed in several counties in Indiana, and are present in Michigan, isolated areas of Ohio, and areas of Western Kentucky.

Palmer amaranth is an aggressive plant that thrives in drought, can grow more than two inches a day, is resistant to multiple herbicide modes of action, and produces 100,000 or more seeds per plant. Many populations of this weed are resistant to multiple herbicide modes of action. The key to keeping Palmer Amaranth from establishing itself is implementing management practices to effectively eliminate seed production and hinder its ability to spread.

Below are tips for controlling Palmer Amaranth.

1. Scout for and identify problem weeds early. Palmer Amaranth is a pigweed species and can easily be confused with other pigweeds, such as redroot pigweed, during early growth stages. It is critical to identify weeds correctly in order to keep them from spreading. Universities such as Ohio State, Purdue, and Michigan State have excellent fact sheets with pictures to aid in weed identification.

‪3. Crop Rotation. Rotation from soybeans to corn will allow for the use of additional herbicide modes of action (herbicides used in corn) that are effective at controlling Palmer Amaranth.

‪4. Hand Weeding. If plants escape normal management practices, removal before they produce seeds is essential. If a seed head has formed, place a trash bag over the seed head before removing the plant from the field to eliminate the spread of seeds across the field.

Time to scout for palmer amaranth 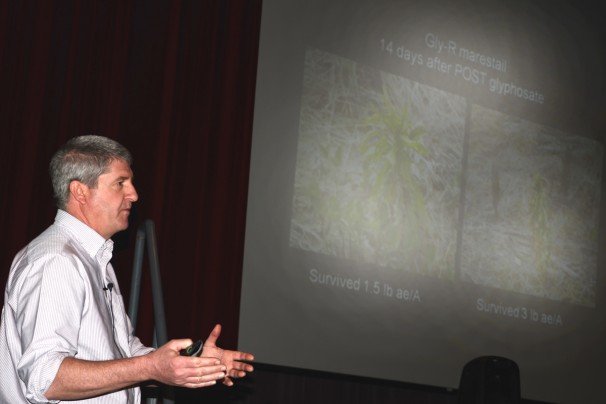