Home / Slider / One picture of corn that almost broke the Internet 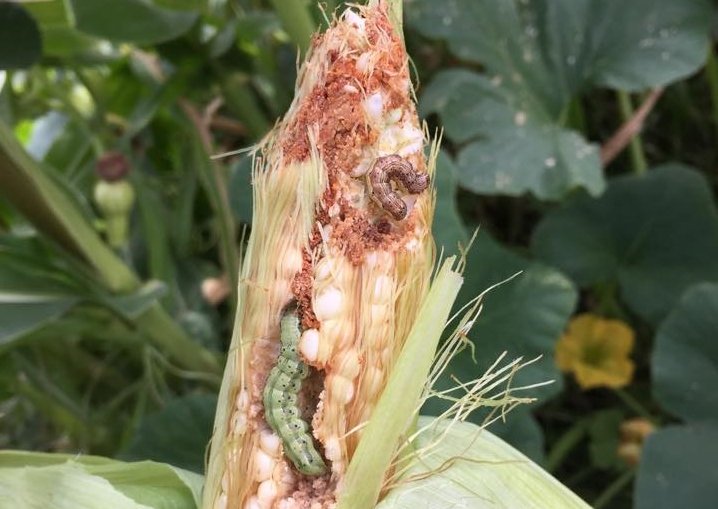 One picture of corn that almost broke the Internet

I’ll admit it, one of the things on my bucket list is for something I post to go “viral.” That is, to be shared a gazillion times on the internet and be known as that guy that did the worst belly smacker off of the high dive in history, or caught the ghost of Elvis during a selfie or witnessed a TRIPLE rainbow (what does it mean?!). Who wouldn’t want their 15 minutes of fame, which is more common in our online world, yet just as fleeting?

Michelle Gigger, a farmer and teacher of ag and biology, found herself in the likeness of other Internet stars when she posted a picture on social media of an ear of corn being gluttonously devoured by a few very hungry insects. The caption read “Here people, this is your organic, Non-GMO, pesticide free corn. Enjoy! Would you like salt?”

So far, Gigger’s picture has been shared 1,300 times alone on Twitter, made a jump to multiple Facebook pages where one page alone has had 500,000 engagements due to the quippy snapshot. Gigger never wanted this kind of attention. When she posted the pic, she admits she only expected her usual followers to see it.

Then began the barrage of insults and name calling and adjectives that would make the devil blush. Gigger wrote in a follow up post about why she chose to post that picture and caption.

“Quite simply I am sarcastic with a twisted sense of humor.  I am also pro biotechnology, but I do support all aspects of agriculture. We are privileged enough to have options in our food supply.  The seeds I had used were non-GMO and I had also planted a variety of corn. The corn in question was a sweet corn varietal that had constantly required extra tending. I was using organic methods of fertilizing, weed control, and had inter-cropped in a method I had found worked for me that helped prevent pests. Honestly, I would have normally sprayed, but I was out of town at the correct times. While harvesting all varietals of corn Sunday morning I noticed much of the corn in question had an infestation, none of the other corn did.”

Gigger engaged in some really great conversations because of her controversial post and received quite a few pictures of beautiful looking organic corn from all over the country. She says that is one of the positive takeaways from her experience.

“I jokingly say I feel like the Katniss Everdeen of the conventional farming movement. The theme of my internet notoriety has been this: how we discuss subjects on social media matters. Should I have used a different caption? That’s a matter of opinion. I still find what I wrote funny, and it has sparked debate, which is great.  Have I gotten in heated discussions about it? Hell, yeah. I have opinions and I will defend them. Is it OK for people to critique me? Absolutely. While I am a small scale farmer, there is no ‘hobby’ about my farm.  If my crop fails, my income fails. If the extra produce and fruit I produce for my family fails, I fail, and my kids don’t eat as well as they could. I hold a huge stake in the success of agriculture and my farm.”

Besides farming,  Gigger teaches. She is currently a science teacher and for seven years she was an Agriculture Teacher/ FFA Advisor in California. She has baccalaureate degrees in agriculture and science and had the privilege of working on game changing Transgenics projects in the late 1990s at UC Davis. Although Gigger has spent many hours in the classroom, both as the pupil and the teacher, this one Twitter post has given her an entirely new lesson.

“My final thought I have after this experience. If you ever have a viral post: thicken your skin.”

Read more from Gigger’s blog, East Of The Mountains.