This is the process the manure goes through in the PRS.

The vexing problem of phosphorus in the water continues to make big headlines and haunt animal agriculture. This political hot button, however, has led to some positive developments in research regarding on-farm practices and technology. One of the most recently announced innovations addressing this problem is the Phosphorus Recovery System (PRS) from Quasar Energy that removes nearly all of the phosphorus from manure.

The Brown family dairy farm near New Bremen, in the heart of one of Ohio’s key livestock regions, hosted an event in conjunction with the Quasar Energy Group demonstrating the new Phosphorus Recovery System (PRS) in July.

“It’s funny that we are doing this here because I’m probably the one that helped start this phosphorus problem in the first place,” Alvin Brown said. “I used to want every inch of every field covered with manure, and now, we are working to reverse that idea and the growing problem.”

Alvin started his farm with 10 dairy heifers in 1959, and his son, Lou, is now running the farm with about 275 milking cows along with 180 heifers at a near-by farm. Lou has put great effort into helping find new ways to reduce the phosphorus issues in his area. He is a member of the Auglaize County Soil and Water Board, Lake Loramie Advisory Board, Ag Solutions, Great Lakes Initiative, and Top of Ohio. On top of all those organizations, he is also currently serving as the Director of Ohio Dairy Producers.

“It was not just random luck that our farm was chosen for this demonstration with Quasar,” Lou said. “Our whole family has put so much time and focus on this issue, that it only makes sense to have it here today.”

Lou’s son, Dan, obtained his master’s degree in biodigesters at The Ohio State University in Wooster where he actually worked with Quasar on the research and other aspects of the project to develop the PRS. They started this project three years ago hoping to develop a digester to help lower the amount of phosphorus in the manure from their livestock.

On the Brown farm alone, their cows will produce up to eight tons of manure per day. In order to be able to move this large amount of manure off the farm, the Browns have a nutrient management plan in place with more than 1,000 acres of land where they are allowed to spread the manure. Everyone who raises livestock in a distressed watershed, such as theirs, must have one of these plans set up with their local Natural Resources Conservation Service in order to spread any manure on the land. This practice is progressively being recommended to other watersheds as well for prevention of phosphorus issues in the future.

According to the Quasar Energy Group, farmers are not solely responsible for the current phosphorus management issues. There are 1,200 wastewater treatment plants between Wapakoneta and Lake Erie that contribute to these problems, At peak flow, 710,000 gallons of water flow into Lake Erie just from the Maumee River every second with phosphorus from farms and water treatments facilities collected along the way.

This is where the Phosphorus Recovery System can be beneficial. As of right now, a farmer is not allowed to spread manure within 200 feet of surrounding waterways because of phosphorus run-off concerns. By removing the phosphorus from the manure, it opens up the possibility of removing those barriers. This can also add other opportunities for manure application including sidedressing corn, depending on the nitrates in the test results, or selling the phosphorus that was removed. This dried form of phosphorus removed from the manure through the process is easy to transport, and it has the possibility to be extremely valuable to the farmers, wastewater treatment plants, and cities who choose to remove the phosphorus from the manure and other wastes.

Quasar is able to accomplish this through a five-step system. First, the manure is pumped into the system from the holding pond. The manure is then processed through the centrifuge that separates the solids from the liquids. The solids from this separation have a total solid content of approximately 25% and contain 90% to 95% of the manure’s phosphorus. Those solids get conveyed to a different storage unit where liquids from the segregates drain into the collection tank located below the centrifuge where it is mixed with liquid hydrated lime. The lime helps control the pH to at least 10.5 to enable thickening and precipitation of the remaining solids that were not captured in the first separation process.

A pump sends this material to a lime mixing tank where it gets further mixed to ensure a uniform pH. The material will overflow out of the top of the mixing tank into a lime settling tank. The solids settle to the bottom of the tank and the liquids leave through a top outlet during this phase. The settled solids and liquids then get pumped out of the tank into a filter press or plate frame press. It will squeeze the liquids out of the material, and this liquid material will have a phosphorus content less than 1 milligram per liter, which can be used for irrigation. The separated lime solids, or lime cake as the Quasar Energy Group likes to call it, can be blended with the solids that were collected from the centrifuge and transported out to another farm or away from the distressed watershed.

The work for the PRS was funded through a USDA-NRCS Conservation Innovation Grant of almost $1 million. Quasar Energy Group is now currently partnering with the Parker-Hannifin Corporation of Columbus that makes many of the fittings for the PRS to make it more affordable for the farmers. The two groups believe that they can achieve the same results with fewer costs and a smaller-scale system that farmers can have easier access to and could afford to purchase for themselves or at least with a group of neighboring farmers. Brown thinks farmers would only have to put in two to three hours a day into separating if they had the system directly on their farm each day. Depending on the value of the removed phosphorus, this could easily be worth the extra time put into this process.

“This is not a well-known John Deere tractor; it is the first of its kind,” Lou said. “Some people are bit gun shy of the new technology while others are willing to lead this project. Regardless, the wide variety of people in attendance from neighboring farmers to the local NRCS, Farm Bureau, Extension, and even senators goes to show how important and beneficial this system could be for Lake Erie and other distressed areas.” 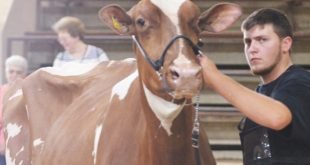 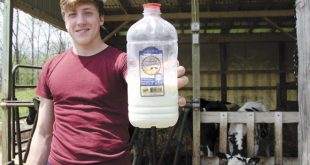