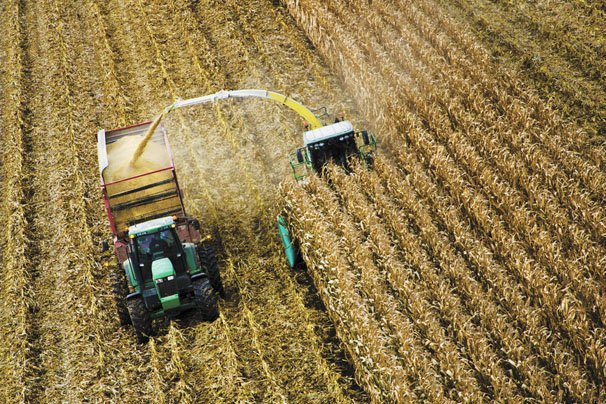 Inoculants at silage harvest can help an already effective regimen

For dairy and other livestock producers wanting to optimize their silage, the addition of inoculant just prior to storage may help to improve their return by minimizing losses and getting the most out of their product.

Silage inoculants help the fermentation process, an essential part of any feed of its type. They contain anaerobic bacteria that result in a high fermentation rate, higher levels of lactic acid and lower amounts of acetic acid.

Normand St-Pierre, professor and dairy extension specialist at The Ohio State University, said there has been a substantial increase in inoculant use in the last few years. This is party due to economics.

“As a guide, if the silage goes above 90 degrees Fahrenheit, you will have a problem. The intake of the cows will drop and you’ll have some upset stomachs,” St-Pierre said. “Good grief, I remember working in New York 20 years ago. At the time, you could buy corn silage standing in the field. There were corn rows standing there and you got it for $15 a cut. So okay, you pack it and you might lose 10%. You lose 10% of $15; well that’s only $1.50. Today, we’re close to about $4 corn on the Chicago Board. That translates our corn silage coming out of the silos around $40 a ton. That’s including growing the corn, going in, and the packing and the equipment and the chopping and everything. Now suddenly 10% of $40, that’s $4 that you’re losing per ton. So that’s something making more sense about the inoculants.”

Not all silage needs an inoculant and St-Pierre said it should be used as a tool. It has little place, for example, in an operation that’s already lacking overall feed management practices.

“The thing that I’m always reminding people of is silage inoculant will not fix management problems. So the process of ensiling, whether it’s haylage or corn silage, is the same. The inoculants are part of the tool kits. They should be used, I think, with corn silage, but it’s debatable. It depends on the price of corn. Essentially, when corn grain goes over $3 a bushel, then it’s a no-brainer. For haylage they don’t have a whole lot of residual sugar, so it depends on when they are cut. Certainly on the first cut, I think, to me, it’s a no brainer,” he said. “They reduce the extent of the fermentation. The amount of material lost from aerobic fermentation justifies an effective inoculant. That’s why we’ve seen a whole lot more use.”

As far as the choices of inoculants go, he said it should be noted that several options are out there in terms of price, value, and other such factors. His advice to farmers is to focus on the research behind a certain product and its validity.

“Now there’s a lot of people confused where you have a whole range of prices and all sort of companies,” St-Pierre said. “Ask the company if they have control research. Not necessarily of their own. University research is what we like to find. That is more unbiased than if you have a company representative going and doing their own trials. Also, look at the reputation of the company. If they make better products and are known to have good effective products, they are more likely to have a good effective lactobacilli.”

He also points out that inoculants are made up of living organisms and have to be handled as such.

“To be effective, the inoculants themselves have to be alive. So when you get those on your farm, make sure you read very carefully the instructions on how you’re supposed to store them and then apply them,” he said. “There are instances I have seen some producers mix them way too early. By the time they apply it the microbials are mostly dead. That doesn’t help much.”

Application of the inoculant is primarily at the time of harvest without delay.

“Well, the applicator can be either put in the chopper itself, or it can be put up on loading, like in a tower silo. Both are equally effective,” St-Pierre said. “As soon as you have chopped the plant, it’s a race against oxygen. You need to have the material packed as quickly as possible. In a tower silo, it’s gravity that takes care of that. In a horizontal bunker type silo, it’s the heavy machinery that you run over it. The main cause of poor silage is people just don’t have enough machinery to pile in proportion to the equipment they have in the field. So the material arrives too quickly.

“Every year it surprises me that some people will think about going and sharpening the knife on the chopper the day they plan to chop. You can do that ahead of time. Have your equipment ready and functional. Have sufficient equipment. The other major determinant of the quality of silage, whether it’s corn or haylage, is the percent moisture, or percent dry matter, which is one in the same. You want to avoid going over 36% to 38% in a bunker silo with corn silage, on a dry matter basis. You want to make sure you have 62, 64, 66% moisture. If you have less moisture than that, you will have problems to pack it up. You will have some oxygen. Plus the kernels at that point start being quite hard, and you will have some unreasonable amount of corn grain that will go undigested in the animals when it’s fed.”

The same thing goes for haylage.

“Generally with haylage you can increase the percent of dry matter by 2% or 3% over the recommendation for corn silage. It depends also of course on the silo structure. With a tower silo, you need to have the material a little bit drier than in a bunker silo. Again, a good advisor would provide the optimal percent dry matter recommendations for a given structure. That will have more influence than anything else,” he said. “If you’re outside the correct range, I don’t care how much inoculant you’re going to put on, you’re going to have crappy corn silage. If you put the correct amount of moisture, the correct amount of packing as quickly as possible, then an effective inoculant will be really paying off for you. If you haven’t done the first two things correctly, you’re wasting your money on the inoculant.”

Success requires a well-managed, efficient operation from the field through storage.

“The essence is, as soon as the crop is chopped, bring it in the silo. Whether you have a vertical silo, a horizontal bunker type silo, you have to pack it up as quickly as possible. Many farms just don’t have enough packing equipment for the rate at which the silage is coming from the field. You need to exclude the oxygen out of there as quickly as possible,” St-Pierre said. “When you’re stuck in late afternoon or early evening, you have to cover it and uncover it the next day. It’s a pain in the neck. I understand that, but if you don’t do that, you end up having the silage where you see those bands of dark horizontal lines. That’s where it was stuck for one evening, and maybe it rained and didn’t start for two days after that. You have bad fermentation. It can make the animal sick, plus you have a loss of material that can exceed 10%.”