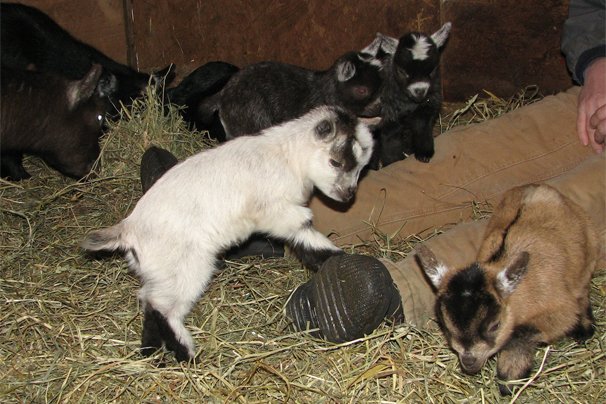 A healthy and normal birth is just the first in step raising livestock. Anyone who has ever had livestock born on their property knows that the fun has just started but the work is not over.

The eight Pygmy goat kids born in my barn in late February were a tremendous blessing. Eight was the largest number of kids I have ever had born from just three does. I have enjoyed caring for the kids and playing with them, but it has not all been fun.

With an increase in numbers, of course comes an increase in the chance for things to go wrong. The first sign of trouble was baby goat with scours. I assumed poor Arthur just had an upset tummy so I treated him with products I had on hand designed to rectify issues like his.

After two days of treatment, Arthur wasn’t any better so I stopped by my vet’s office and purchased another treatment designed to prevent scours. The scours went away, but a few days later, I found Arthur lying in the barn with a fever of 105.5 degrees Farenheit.

Because I found Arthur in this state on a Sunday, I treated him myself with products that my vet had sold me to keep on hand for such occasions. By the next day, Arthur’s fever was gone, but he had developed another startling symptom — seizures. A trip to the vet with Arthur in tow was definitely in order.

Before Arthur’s scheduled appointment, a previously undetected abscess blew out of the top of Arthur’s head. Both the vet and myself were relieved to have a visible source for some Arthur’s symptoms.

My vet prescribed additional treatments for Arthur based on a diagnosis of the abscess and a guess that his seizures might have been caused by a Vitamin B deficiency.

Two days later, Arthur’s fever was still gone, his appetite was better but his seizures were more frequent and severe. I called my vet back with the sad news that I thought Arthur was probably going to need to put out of his misery. The seizures were pretty constant and violent at that point.

My vet wanted to try one more treatment and boy am I glad I took his advice. After another course of antibiotics and steroids, Arthur is symptom free of seizures and infection.

Our best guess is that the abscess was the result of a rare infection from his disbudding (dehorning) procedure and that perhaps, because baby goats’ skulls are not yet fused, the infection got into his brain and caused the seizures.

Whatever the cause, I’m happy to report that Arthur is back to normal. I’m thankful that I had access to excellent veterinary care to help me through this very rare side affect — infection — of the very necessary procedure of disbudding. The even more rare side affect of the infection — seizures — could not have been overcome without the advice and care given by my vet.

Thank goodness for large animal veterinarians that are willing to take the time and go the extra step to help their customers and patients. Be kind to your local veterinarians. You never know when they just might help you save a life.