Home / Crops / Blackbirds in the corn 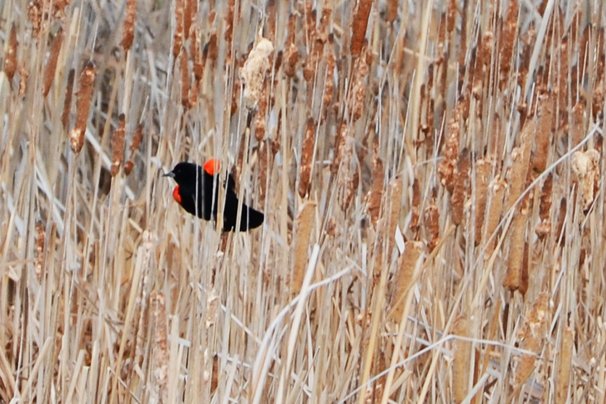 Red-winged blackbirds reside in the marshy areas around farms and feast on field corn in the “roasting ear” stage.

Blackbirds in the corn

While many corn growers around Ohio are taking extensive measures to guard against pests this growing season, there are probably not so many who are going to the lengths to protect their corn yields from pests as Jevon Rockwell.

The Rockwell family farms in Erie County up along Lake Erie and faces significant yield loss from pests not normally a significant concern in many parts of the state — blackbirds.

“We farm four or five miles from the Lake. I think the problem is that there is a lot of marshland and places right around the city of Huron where they live. They are already thick in the woods this spring,” Rockwell said. “When they fly across the fields it looks like smoke, they are that thick. There are tens of thousands of them in the fields. In late July or early August they will come at sunrise and leave about a half hour before sunset. We have all learned to live with it around here. It just comes with the territory. Probably half of acres are affected the by birds — the best corn ground we’ve got. On our farms two miles west, we never have bird problems. They seem to stay east of U.S. Route 250 and north of the turnpike. We can get good yields but then we lose 30 or 40 bushels per acre because of those birds.”

The Rockwells have been chasing blackbirds out of the corn for many years, but last year there was some very significant yield loss from the pests. The problem was most evident in a consistently high yielding 70-acre field.

“We have 70 acres right by my house and we were trying to grow 300-bushel corn last year,” he said. “We knew the birds could be a problem so we split the planter with hybrids. We plant 16 rows, so we split it 8 and 8. We had 120-day Pioneer corn on the one side and 112- or 113-day DEKALB corn in the other. The blackbirds like to pick at the corn when it is in its milk stage and at the end of July or early August they hit it really hard for three or four days. The DEKALB corn was further along and they just nailed it. They stripped it back a third of the ear, every ear down the row — sometimes three or four inches down the ear. They picked right to the row of the 120-day corn that was so much further behind and they left that alone.”

The yield losses in the earlier maturing corn were devastating.

“We were tracking the yield closely on that farm. We shelled it 8 and 8 to keep track. The average on the 120-day corn on that farm was 320 bushels or so and we had some places hitting 340 bushels,” Rockwell said. “On the earlier DEKALB corn, there were a lot of places that were lucky to be making 160 or 170 bushels per acre. Part of that difference could have been the genetics, but this ground should produce 200-bushel corn no matter what. We had 330 pounds of nitrogen out there. We jumped though all of the hoops in that field and there were no insect problems out there. Some people have told us that the birds come in when there are insects out there, but that was not the case. If I were to guess conservatively, we lost 40 to 50 bushels per acre from the birds in the earlier hybrid. Those birds ate a lot of corn. When you have high yielding corn like that you really notice the problem. This last year was a huge eye opener. It has never been like that before.”

And, not only do the birds hurt yields directly, the damage they cause also sets the stage for more problems.

“They eat half the ear and then what happens after that is just as bad. Once they open that husk up and we get some late rains, water runs down the ear and sprouts the bottom kernels. And then we get this blue mold that is carried in the bird’s beaks,” Rockwell said. “It kills the test weight with the sprouting and the mold and you get a sore throat by breathing it in at harvest. That is another reason we will never plant all one maturity in this area. We can blend it out at least when they leave one hybrid alone.”

Along with planting different hybrid maturities, the Rockwells also look for tight husks.

“They are always going to pick the ears with the least amount of husk cover on the ear,” he said. “We need a hybrid with a good tight husk cover. Some of the new hybrids with bigger ears stick out of the end of the husks. A lot of guys don’t want a tight husk cover because of the dry down, but that is what we look for.”

The birds are also a consideration with the planting date for the corn.

“Planting dates make a difference. They hit the earlier corn first,” Rockwell said. “If we are the first ones out there they will hit our fields and not come back and get the neighbor’s later fields. We want top yields so we try to plant early but then we are more likely to get more problems with the blackbirds.”

In addition, the Rockwells go to great lengths to try to scare the birds away.

“We use old carbide cannons converted to run on little propane tanks. We set those in the field and try to scare them, but the birds get used to it. Once the birds get established in the corn it is almost impossible to get them moved out of the corn. The cannons usually just scare them from one end of the field to the other,” Rockwell said. “We also have tried a red-winged blackbird distress call and that actually works the best. It scares them right out of the field. We mounted speakers in an oak tree in the middle of a 40-acre field and ran it off a car battery. Every day or day and a half when that battery would die, I would cart a new car battery out there, switch it out and charge the old one back at the farm. Then we set up a power inverter to get it to run on 120 volts instead of 12, which helped. This year my brother mounted a solar panel to it so that will hopefully help. I think we may shut one row off of the planter, right in the middle of field so we can put that out there. The neighbors will wonder what we are doing, but then we’ll have a 60-inch row we can use to get out there. It is on a cart with a waterproof plastic box. If you don’t get it up above the corn, you can’t get the sound to travel. The corn muffles the sound.”

There is also a spray called BirdGuard that the Rockwells are considering.

“BirdGuard can be sprayed from an airplane or a RoGator and that is a possibility,” he said. “But you have to time it just right and it is expensive. We may give it a try though. This year we are doing more than we ever have to keep the birds away.”

They have also considered detasseling some of the corn.

“We farm near Schlessman Hybrids and they do not seem to have bird problems in the corn they grow for seed,” Rockwell said. “They detassel the corn and we have talked about getting a detasseler and using it every four rows or so.”

Along with corn, the Rockwells grow soybeans and wheat, which are mostly ignored by the blackbirds.

“We grow about twice as many soybean acres as corn and we grow some wheat. They don’t really bother the beans or the wheat,” he said. “They aren’t that thick when the wheat is ready. They may knock the grain out of the wheat heads at the field edges, but are not much of a problem. We used to grow popcorn and we never once had bird problems in that.”

It is not just blackbirds that can be a problem for field corn, according to Bob Nielsen, at Purdue University. Grackles and crows can also often feed on developing ears in corn fields following pollination early in the grain filling period.

“Large flocks of these birds can cause a tremendous amount of damage and will often target one hybrid over another. Damage is often most prevalent along field edges and nearby wooded areas, but can extend throughout a large field,” Nielson said. “The symptoms that immediately catch the eye are the missing or damaged kernels on the cobs. Damaged cobs often turn brown or black once molds begin infecting the damaged tissue. The evidence that clearly identifies birds as the culprits are the shredded husk leaves that result from the birds working their way to the kernels.”