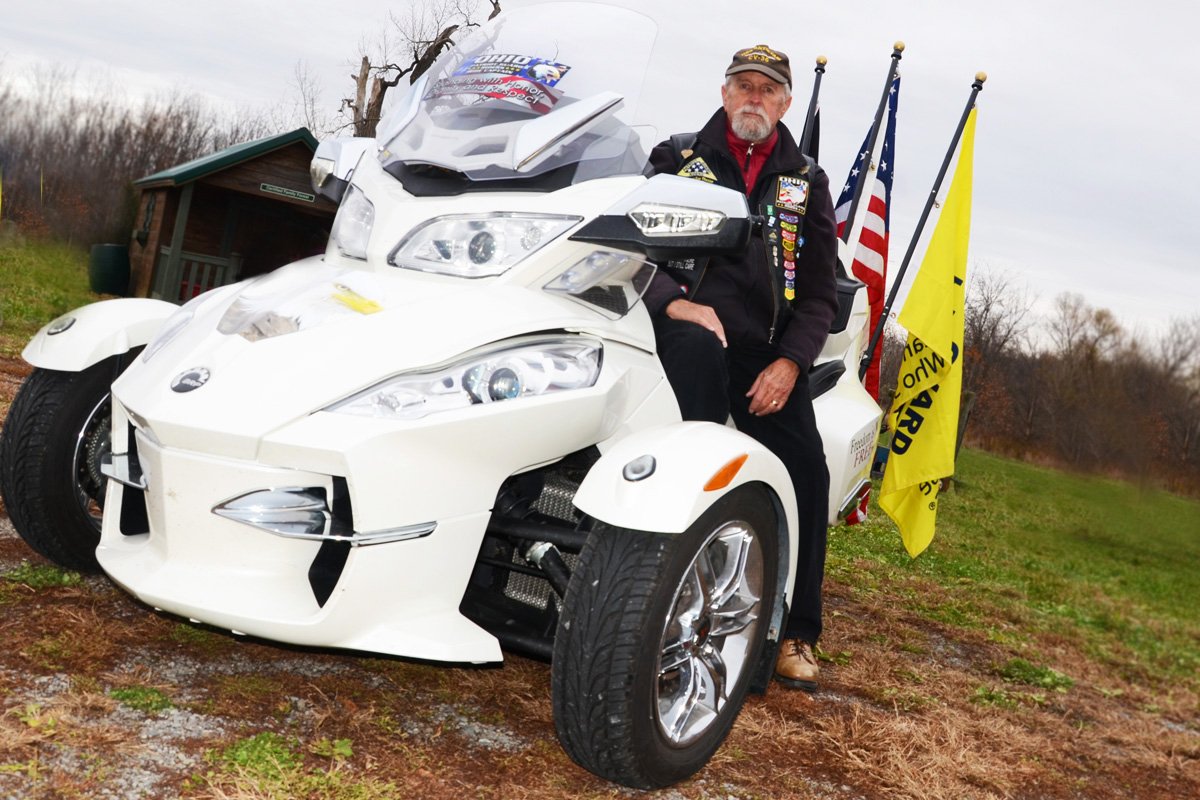 Jim Michael is a volunteer Patriot Guard Rider in Lima and travels the state on his motorcycle with mounted flags to honor those who lived and died serving others.

On this Veteran’s Day, it may be hard to imagine that anything other than respect and dignity would purposefully take place at a military funeral. But, unfortunately, such events have been plagued by protests and other challenges in the past that put an already grieving military family through more suffering.

In response, the Patriot Guard Riders — a volunteer, federally registered non-profit organization — was formed to ensure dignity and respect at memorial services honoring fallen military heroes, first responders and honorably discharged veterans. Jim Michael is a volunteer Patriot Guard Rider in Lima and travels Ohio on his motorcycle with mounted flags to honor those who lived and died serving others.

“I travel to missions from the Toledo area to Cincinnati, depending on what is needed. It is a really rewarding experience,” Michael said.  “When I am out on a mission, I always try to have the U.S. flag in the center, and I often have an MIA POW flag on one side and a flag from whatever branch of the service they were in on the other side.”

The Patriot Guard Riders is a diverse group of volunteers from across the nation — many do not even have motorcycles. The one common theme of the volunteers (many of them veterans themselves) is an unwavering respect for those who risk their lives for America’s freedom and security.

“We like to pay honor and respect to veterans — and not just military veterans. It could be policemen or firemen or anyone who serves the public. We do that in a variety of ways,” Michael said. “We serve all soldiers killed in action (KIA) with missions and pay our respects there. We do welcome home celebrations, escort families when someone is sent off for duty, and work with any family who wants to pay respect to their fallen hero. They can call us and we’ll step forward to do that.”

The main mission of the Patriot Guard Riders is to attend the funeral services of fallen American heroes as invited guests of the family; show sincere respect for fallen heroes, their families, and their communities; and shield the mourning family from interruptions created by any protestors. The Patriot Guard Riders also emphasize that their efforts are accomplished through strictly legal and non-violent means.

“Patriot Guard Riders got started in 1995 and we have grown into a mission of honor and respect for a fallen hero. It has evolved over the years,” Michael said. “During a funeral of a fallen hero we stand in a flag guard at the door during the visitation hours. We make sure there is never an opportunity for the flag to not be present during the funeral service. During the service we do a final salute and then we present a plaque to the family. We do escort work too. For a KIA, we pick the family up and escort them to the visitation and the funeral home and to the cemetery and stand guard there. We do not depart the cemetery until the body is in the ground and we know it is taken care of. The family can rest assured that we will see things through to the end to make sure things are taken care of they way they are supposed to be. We appreciate people calling us and anytime we can help any service for a fallen hero, it is our honor to do that.”