Home / Crops / Fall is a great time to sample for SCN

Fall is a great time to sample for SCN

There is still much to learn about the evolution and management of soybean cyst nematode (SCN). For now, though, one of the best on farm approaches for addressing this potentially costly problem is to sample fields. Here are some things to know.

1.  Yield losses can be huge when SCN populations are high and susceptible varieties are planted.

2.  SCN tends to sit in pockets, especially in no-till production systems — so knowing where to sample is important. From our North Central Soybean Research Program funded project we have been able to grid sample numerous fields. From this exercise we have also been able to show how variable SCN is in fields.  Within a 25-foot span we can go from undetectable levels to over 2,000 eggs per cup of soil. This level is where we begin to see measurable yield losses. Monitoring a field and noting where yields are low is key and those are the places to target soil samples to begin with. Long term monitoring of the location and the size of the infestation to be sure it doesn’t grow and get out of hand.

3.  Because of the resistance and other issues, rotation might not be working as well as it should. We have visited some fields in Ohio over the past three years where SCN is a major problem. These are fields where SCN populations got above the 10,000 eggs per cup of soil or greater. The producers did the right thing and rotated out of soybeans for three or more years then replanted again with a resistant soybean and got hammered again. When we took samples from these fields, the numbers were still too high. We have some SCN populations that are really only interested in feeding on soybeans and they will wait until the field is planted.

4. The best management practice overall is to keep those populations low and don’t let them get above the 5,000 eggs per cup of soil mark. It’s a lot easier to keep low populations low than it is to reduce high populations. This can be done with rotation. Keep the numbers low by planting non-hosts (corn, wheat and alfalfa); keep weeds under control in the fall and spring that might add another cycle of reproduction; and plant varieties with the best SCN resistance package. If SCN populations stay below this level then hopefully we will not end up in a situation like number 3.

5.  So sample. Collecting soil for SCN sampling is similar to collecting for a soil fertility sample. In the top six to eight inches of soil, sample in the row and not between the rows. Walk in a Z or W pattern and collect cores in a bucket. Mix them thoroughly and send a good quart bag size (labeled with a permanent marker with your name and location) to the SCN testing lab of your choice.

Target the areas where you saw the yields drop, plants were stunted or they matured earlier than the rest of the field. They tend to be the hot spots. Note the size of these areas in the fields and continue to monitor them. But also remember that SCN can reduce yields significantly without causing any visible symptoms. Here is a rough guideline for determining when and where to sample:

• If your populations come back as non-detectable (0) and you have a good three-crop rotation (corn, wheat, soybeans) and you do not plant a double crop, sample for SCN every 20 years.

• If your populations come back as non-detectable (0) and you have wheat in your rotation but you double crop, sample for SCN every 10 years.

• If your populations are non-detectable (0) and you plant corn and soybeans, sample every 10 years.

• If have SCN populations of 40 to 2,000 and you rotate corn/soybean/wheat, sample every five years.

• If SCN populations are 40 to 2,000 and you only plant soybeans, sample every year.

• If SCN populations have gotten out of control in the past (greater than 2,000), sample every year.

7. If the numbers are high, but you have been growing SCN resistant varieties, it is a good indication that SCN has adapted resistance. Most resistant varieties have the same source of resistance (PI 88788), so selection pressure is high for SCN that can break resistance. To get the numbers down, rotate to a non-host crop for two to three years, and then find a variety with a different source of SCN resistance, such as Peking (the source of resistance should be listed in variety descriptions from the seed company or from the seed dealer). Recheck the SCN numbers before planting soybeans, and don’t include susceptible soybeans in your long-term rotation. Be sure to use a different resistant variety for each soybean rotation. 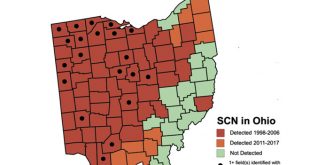 Do you know your SCN number?

Do you know your number? 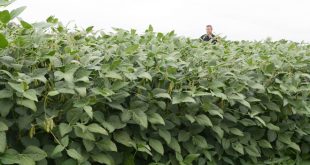 Have SCN sorrows been drowned in soggy fields?