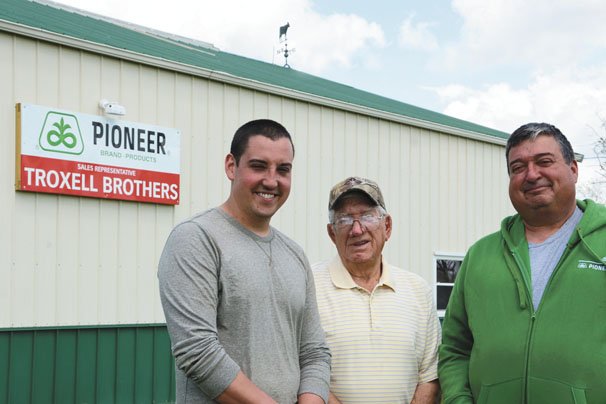 Jeff, Richard, and Tom Troxell have a long heritage of farming.

As the nation forged its way into the wilderness of the West, railroads facilitated progress, carving their way through cities and farms along the way. Presidential trains, circus trains and trains for commerce alike have watched the crops and harvests as they passed through the productive fields of the Troxell farm since 1876 on their steady journeys across the country. And generations of Troxells have watched the trains from their Ohio Century Farm.

“We farm on both sides of the tracks and this is a busy railroad,” said Tom Troxell, the fourth generation of the family on the farm. “The Nixon and Ford presidential trains went through here, and we have seen circus trains. Most people don’t think too much about trains, but I always look up and see what the trains are hauling when they go by.”

The family got their start on the land with William Troxell, the grandson of a Revolutionary War soldier of German descent. At the age of 20, with little formal education and almost no money, William came to Ohio from Virginia in 1836 to work as a farm hand in Clark County near South Charleston.

“When he came to Clark County he was not worth $25, but by constant toil and persistent industry, he has accumulated 550 acres of land, besides paying of $15,000 security debts. He has always been a friend of the poor man, and ever anxious to help a struggling neighbor,” according to “The History of Clark County, Ohio” from 1881. “Mr. Troxell is strictly temperate in his habits, is one of the most energetic, enterprising farmers in Clark County, and stands as one of its most successful men in farm life.”

William eventually settled on the farm of his first wife, that he purchased from the heirs. He was known as a man of integrity.

“He is respected for his honest and upright character, his word being always considered as good as his bond,” according to “The History of Clark County, Ohio.”

After his first wife died, William re-married and had six children. Of the six children, William and Paul took over the farm in 1910. The second William’s son, Richard, and wife, Mary, then carried on the farm tradition. Now, their son Tom and his wife, run the farm operation with the help of their sons Charlie and Jeff. They even get a little assistance on occasion from the sixth generation of Troxells on the farm, Charlie’s young son Oliver.

The founding William’s acreage was split up in the second generation, but the family has expanded the acreage since then.

“My Grandpa’s (the second William) farm started out with around 120 acres on the original homestead and it has grown from there,” Tom said. “He grew up in the horse and buggy era and I can remember him sitting and watching the cars go by and calling them ‘machines.’ Horses used to be a big thing for us. Grandpa was a real wheeler-dealer with horses and he was a livestock man to the end. When he died, he had a heart attack feeding cows at 92. I don’t ever remember seeing him driving a tractor. My grandfather probably saw the most change in farming ever, but my dad has seen more than him and I think we’ll see more change than my Dad.”

Corn and soybeans are the main production focus on the farm today, though there are still registered Shorthorns on a few acres of permanent pasture. Like the founder of the farm, every generation has had to battle adversity to get the farm where it is today.

“When things got tough, you didn’t go anyplace and you didn’t buy anything. We would take on different jobs on the side too. Our Pioneer seed business started on the side in 1976 and we’d do odd jobs through the summer. My brother sprayed roadsides in the summer and we used to put equipment together for the local implement dealer. I built grain bins too in the summers,” Tom said.” We farm 800 acres now and do some custom work. We all have off farm jobs — our 500-acre jobs. We make as much from those as we would with another with 500 acres.”

Despite the challenges, the generations of Troxells feel fortunate to have been a part of the rich farming tradition in the area that has sprung up from the rich soils on both sides of the railroad tracks.

“The ground around South Charleston is very good. The glaciers treated us pretty well. You don’t have to go too far to find ground that looks the same and smells the same, but it’s not the same. It’s not Charleston dirt,” Tom said. “The farmers have always been a little more prosperous and they tend to support things more in the community. It is easier to make a living on good dirt than bad.”

Political community leadership, 4-H and farm organization involvement are consistent throughout the family’s history, but a love of farming is the overriding theme for the Troxell heritage.

“We have a grandson, Oliver, and his first word was ‘tractor’ and his second word was ‘combine.’ His third word was ‘lawn mower,’” Tom said. “If he had his choice, he would be outside all of the time.”

Much has changed, but the hard work ethic, caring for others and love of agriculture has continued through the generations as the railroad and the farm evolved together, along with the nation, as Richard grew up.

“I am awfully proud of this family,” said 86-year-old Richard, the third generation on the farm. “People would drive their cattle to market back when I was young. We always had a big fence out in front of the barn and they would put their cattle in and spend the night here when they were coming through. My mother would always fix them dinner. We would also be the place the out of work railroad workers would come to eat and look for work.”

In those days, hard, hand labor was required to move the farm forward.

“I can remember my mother killing chickens and dressing them and selling them for a quarter. We had a neighbor who raised potatoes and we would help pick potatoes after school until dark and I got a quarter for that,” Richard said of his childhood. “We made loose hay and I would ride the horse that pulled the hay into the mow. I would drive horses and tell dad where to pitch the loose hay onto the wagon. We milked by hand.”

From those days of hard hand labor, technology began to change agriculture on the farm.

“We had horses until the 40s. I remember planting with a two-row planter with horses and a check

wire. Our first tractor we got was in ‘37 and from then on the horses started to disappear. I remember having a threshing ring. You got to know all of your neighbors and it was a really nice thing. They farmed the farms they lived on. It was different than today,” Richard said. “When were first got a milking machine, that was really something. Dairy was all right but we got out of that and stayed in beef cattle. Our first combine did not have a cab. You would just sit out in the open. It was the same with the corn picker. I could stick my foot out far enough to touch the reel that was going around. We would cut the corn and haul it in to shuck it in the winter and bed down the animals with the husks. I remember when the boys and I got the six-row planter. We thought nothing would ever be bigger. We thought that was a marvel.”

Richard and Mary were glad to raise three children, Rick Amy and Tom, on the farm and see that family tradition continue into the next generations with the steady effort of a westbound train over the tracks dividing the farm.

“There will always be changes, but we can’t forget our history. The next generation makes you want to do things better,” Richard said. “I think they learned responsibility, which is a great thing. Growing up on a farm you understand the value of things a lot more. Tom has taken over the farm and I am just around now to go get parts and things like that. It has been a wonderful life on this farm.”