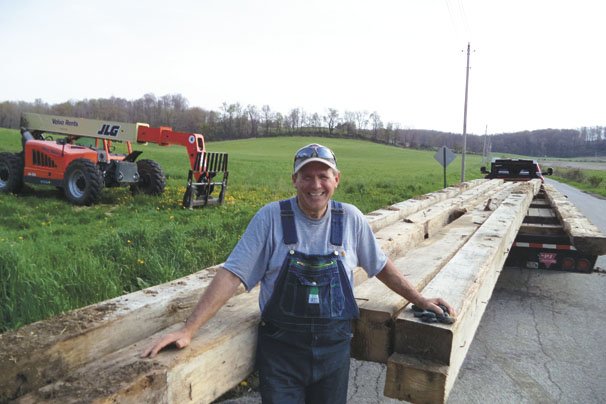 Randy Smith used to have a Harley Davidson motorcycle, but he doesn’t anymore. He traded in the freedom of the open road and the rumble of an engine beneath him for dark corners, creepy critters and centuries of dirt and neglect that are part of a career and lifestyle most people may not find all that appealing.

“Rooting around in old barns is not necessarily at the top of the list for many people. You have to be a unique individual to want to deal with mice, birds, bats, skunks, raccoons, or a seven- foot-long black snake in a haymow and deal with stuff that has been sitting there for 150 years,” Smith said. “But I am addicted. That is why I traded the Harley in for a skid steer. We have over 40 barns that we have taken down in past 10 years and approximately 12 since June of 2013 since working fulltime.”

Smith got started in the barn business when he tore down an old barn to build his home and needed more material, so he needed more old barn wood. Smith calls his Mt. Gilead-based business Ohio Valley Barn Salvage. He calls himself a “picker.” He roams central Ohio in search of unwanted barns to reclaim.

“Right at the moment, we are working in a four-county area in Central Ohio. We are pickers. We are at the bottom end of the food chain. We’re the guys going in and rooting around and finding barns, taking them down pulling the nails out, and doing our best guess on the species of wood. Then we turn around and sell it to wholesalers or retailers depending on who is looking for wood. Typically, I’d say 80% of our sales probably go through wholesalers. They stock it in their yards and they have retail customers across the U.S. They process it and make it into cabinets, flooring, or build homes with it. There are usually those three steps before it makes it to its final reclaimed use,” he said. “ We do everything from getting paid to take down barns that need to be disposed of on up to some owners getting up to $20,000 for a barn. If the barn is salvageable, it can generate some income for the owner.”

The value of the barn depends on a number of factors, with most barns averaging $2,500 to $5,000 generated for the barn owner.

“If it is all white oak, with big timbers built before 1850, I know people are dropping a lot of money to get them. The most I have ever paid was $12,000 for a barn. It was chestnut oak,” Smith said. “Big hand hewn beams — that is what everybody wants. That will get your barn on the list to be torn down. White oak and chestnut are the two top of the line species, more white oak than anything. The market is being driven by architects and engineers and white oak is the only thing that they are comfortable working with. White oak is the most rot resistant out there and that is why everybody loves it. You can take a barn down that has been up for 180 years and those beams will be solid all the way through. Other species like red oak can rot out in the middle. Beech turns into powder and deteriorates faster than anything else. The ash and the elms are a little more rare. In Ohio there is a lot of white oak, hickory and some elm and ash.”

The quality of Ohio’s barns has turned into a surprisingly big business.

“There are around 25 legitimate pickers around Ohio and a whole bunch of wannabes. Ohio is a hotbed for reclaimed barn wood. It is a billion dollar market that nobody ever thinks of. There is pretty big demand right now for all wood species. Wealthy people are doing some unique things and part of that is building cool mansions out of hand-hewn timbers,” Smith said. “Ohio, Pennsylvania, Indiana and Michigan are the prime states for hand-hewn timbers. West of the Mississippi there are none at all. Pennsylvania probably has twice as many barns as we do in Ohio, but I hear New York is picked over pretty well. You get down south in Kentucky with the tobacco barns and after that it gets pretty skimpy. Ohio is the hot spot for hand-hewn timbers. The best white oak is right in central Ohio.”

Flooring, paneling, homes, and mantles are other big uses for reclaimed wood.

“There are 10 or 15 companies out there stockpiling a million board feet of wood all the time,” Smith said. “That is 200 to 250 barns worth of wood in their yard all the time.”

Every project Smith tackles is different based on the specifics of the barn and the owner.

“I have been doing this for 10 years and every one is different. When people have no emotional attachment to it, they just want it gone. Some clients want everything completely cleaned up and that determines the basis of the proposal. We completely take it down put the stone down and grade it out. Some farmers say, ‘Come on in and leave it there and we’ll make it disappear after you’re done.’ Or, the insurance companies may come in and force people to get the barn taken down and put them into dumpsters,” he said. “Every one is unique to the barn and to the customer. That’s what makes this kind of neat.”

Even though there is often value in old barns, many barn owners are unwilling to put the money, time and effort into saving it through reclamation or restoration.

“It is illegal to burn down a barn, but it is being done all the time. You can bury them in the ground but not open burn them. In some cases there is not any salvageable wood and it is of no value. It costs $5,000 to $10,000 to get rid of those and I shy away from that as much as I can,” Smith said. “There is a company called Royal Barn Restoration and he has restored 1,100 barns in the last 10 years, but for every four being taken down, one is restored. Probably 80% of the people I talk to would love to restore

their barn, but from a practical standpoint it serves no purpose. Not everyone can afford to drop $30,000 into a barn. And what do you get when you’re done? An old barn.”

While Smith does not restore barns, he loves to help in finding new uses for old barns.

“A private conservatory is getting a barn that was built in the 1820s. It was one of the best examples of early barn construction in Ohio I have ever seen and we sold that to them to put up as a building that is unique to the area and open to the public,” he said. “It is phenomenal. I was very happy about that. I signed the contract to tear down the barn and five days later a friend of mine called me and told me the conservatory was looking for a very unique barn. It is very rare to find something like that and I would have cried a tear to pick that thing apart and sell it for reclaimed wood.”
For now, it seems that Ohio has plenty of old barns to go around, but as these icons of rural Ohio continue to age, they will become increasingly scarce, Smith said.

“The last we heard, about three years ago, there were approximately 30,000 barns in Ohio,” he said. “So, in another 10 years or so it will be getting skimpy in Ohio.”

And, while he may be sad to see such history go, Smith is proud to help make valuable use of what too often becomes a nuisance and a liability on Ohio farms.

“It is a very unique and fun business,” Smith said. “When I tell my friends about it they think it is fascinating, but when I ask them if they want to come out and help and they say, ‘Nope, not interested.’”

By Todd Hubbs, University of Illinois Department of Agricultural and Consumer Economics The prospect of …