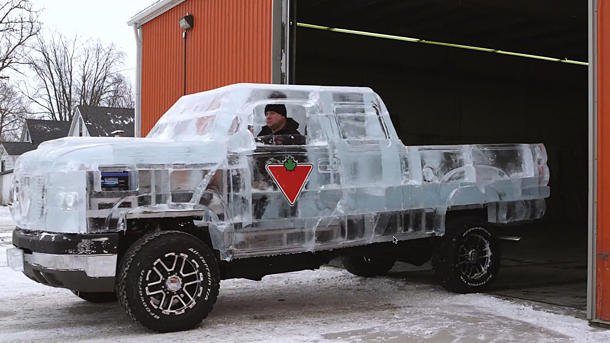 Canadian Tire set out to prove that their top-tiered Eliminator battery can withstand temperatures that are even hard to handle for the most seasoned Canuck, so they created something that has never been created before; an Ice Truck. 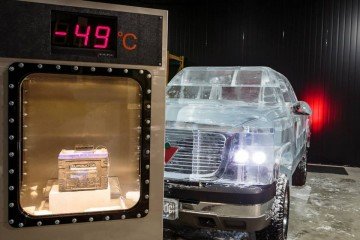 Now I am not talking about a truck that delivers ice around town, I mean a truck MADE OF ICE! This slicked-up Chevy doesn’t have seat-warmers and it may be gone as quickly as Frosty, but for one mile through this Canadian town, it was the coolest truck in the world.

There were some bumps in the road, so to speak, as far as putting this project together. According to Yahoo! Autos, When automakers build vehicles, the material used for the bodywork must be extremely strong and as light as possible. Ice isn’t either of these things. To create the truck, 14,000 lbs. of ice was needed, causing a few problems: The truck’s chassis had to be capable of managing the weight. And once you’ve found a suitable truck, how do you prevent the ice from cracking when hitting bumps and potholes? 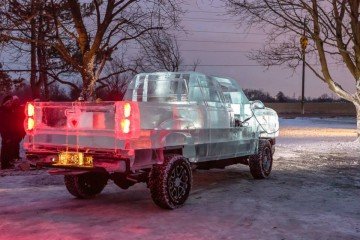 Another problem is how to prevent the engine’s heat from melting the ice. After a thorough inspection to ensure the Chevy‘s 2005 frame was free from rust, the team proceeded to weld it rigid to prevent any unnecessary movement that would cause the ice to crack. They then prepared it to run under its own power without the body, and added extra coolant to help keep the engine from melting the ice too quickly. To establish the best possible clarity, the ice had all the trapped air removed; thus eliminating the whiter spots you tend to find in ice cubes.

After some initial testing, driving over rough roads with a few blocks of ice placed on the chassis, the team deemed their modifications a success, and that the ice could withstand the bumps without fracturing. The only thing left to do was add the remainder of the ice blocks, carve it into a truck, and then drive it one mile through the town of Hensall, Ontario, to set a potential world record for the first self-propelled ice creation to drive. 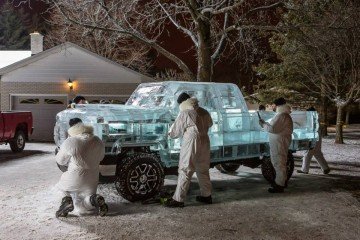 With the ice truck built, Canadian Tire succeeded in its mission, driving about a mile while averaging 12 mph. It has now submitted its efforts to Guinness to become officially recognized as the world’s first drivable ice vehicle. However, as cool as this truck is, watching it melt may be more fascinating.

See exactly how it was pulled off at the video below.