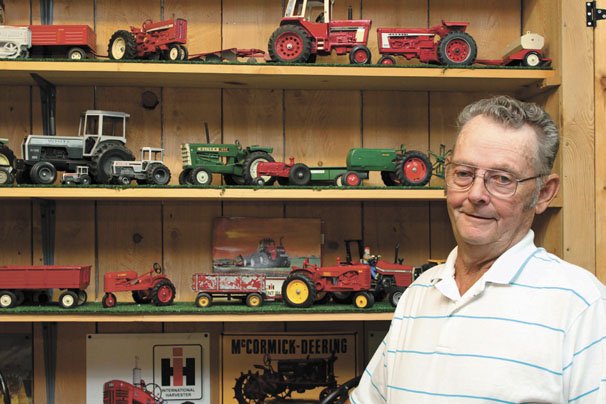 Gary Tabor stands beside one of many display units in his vast farm toy center.

Farm toy collectors launch their hobby through many different avenues. Gary Tabor’s interest in toy tractors developed through gifts of farm toys for his sons.

“Soon after my wife and I bought the John Deere pedal tractor for Jim and the small scale Farmall 400 for Lynn, I gained an interest in toy models. I began looking for small-scale versions of the equipment we farmed with,” he said. “My wife and I began looking for models that we farmed with as gifts for our sons. In 1965, we found a John Deere Model 20 pedal tractor by Ertl that we gave to Jim. Along came a nice 1:16 scale Farmall Model 400 that we gave to Lynn. Then we located a 1955 Farmall Model 400 pedal tractor by Eska for the boys. After hard play over the years and a little repair work, these have become part of our treasured collection. The boys don’t let me forget who owns them.”

A trip to a farm toy show ramped up Tabor’s interest in collecting.

“About 1970, a friend asked me to attend a farm toy show in Cleveland. That day I started shopping for myself and I haven’t stopped yet. My former hobbies had potential danger associated with them, but with farm toy collecting it’s very hard to get hurt,” he said.

The Tabor collection has grown by leaps and bounds over the years.

“I collect mostly Farmall, Oliver and John Deere model tractors. I have all sizes, but I prefer 1:16 scale along with pedal tractors. I try to find a piece of equipment to go with each tractor. The only time I’ll sell anything is when I have two or more of the same item. Then I’ll keep the best and sell the rest,” Tabor said. “My interest includes both farm toys and toy trucks. I probably have an equal amount of both. I enjoy restoring and sometimes customizing toys. I’ve even done a few for friends. I also have an assortment of antiques, including a section of Fisher Price toys. If a toy has wheels and it’s unusual, I

As the collection has grown in number, it has required an increasing amount of space.

“My collection started in our upstairs bedroom. In time, I relocated the stash to a 12-foot by 72-foot mobile home. Then we constructed a building 24-foot by 60-foot for the toys. And now, that building is plumb full. I’ve lost track of the count, but the collection has grown into the thousands,” he said.

Tabor and his family enjoy sharing their collectables with visitors. They frequently host large groups, including bus tours. The local Historical Society has held their meetings in the Tabor collection center, on occasion, located near Williamsfield in Ashtabula County.

Tabor grew up on the farm during the Great Depression, when toys were a rare luxury. He went to college at Ohio State University, married, and went back to the farm.

“As our four children grew and helped on the farm, we were milking about 100 Holsteins. Our crops consisted of corn, oats and hay for the dairy cattle. When the children got married and moved off the farm, the workload was more than we could handle so the cows were sold in 1998. My son, Jim, has taken over the farm. I help out with the corn and soybeans that he grows,” he said

Tractors and farm equipment have made an indelible impression on Tabor.

“The first tractor I owned was a 1935 John Deere Model AO. I still have old Bessie in my antique tractor collection. We’ve farmed with several brands of tractors and implements. International and Oliver made up most of those because we had good dealers nearby,” he said. “You’ll see some of those restored tractors in our collection. We currently own 12 tractors, including a 1939 Ford Model 9N and a Case Model 2670.”

There are also many highlights in his smaller scale collection of toy tractors, but for Tabor it goes without saying that “a cherished replica is in the eye of the beholder.” His sentimental favorite resulted from a special gift.

“The 1:16 scale die-cast Massey Ferguson Model 3165 is my prized possession. One day, the kids wanted to look around at the local antique mall. They led me to a display with a Massey 3165 toy tractor. I commented that it was a nice piece and noted that it was listed for $30. When we got home, I checked it out in my price guide and decided I needed that tractor,” Tabor said. “After chores the next morning, we went back to the mall to fetch the Massey. When we arrived at the mall, it was gone. I kicked myself for not buying it earlier and came home disappointed. I didn’t know my children slipped back and bought the tractor for my birthday. And, my wife was keeping a little secret as she hid it under our bed where it remained until the day of celebration. When you really want something and your family beats you to the punch, it becomes a gift with lasting love.”

Tabor’s treasures are associated with a unique story on how he acquired each one. Those reflections would fill volumes of printed stories.

“I could spend days telling how I got each toy. In many cases I stumbled onto a piece browsing through a mall or flea market. Friends would tell me about something special they had seen or bring it by for me to consider. Or, I would find a gem at a toy show. I like customizing trucks. When I find the right one, I grab it up and eventually get it made up to my liking,” he said.

Some of the more unique toys in the collection were crafted during war years when more standard materials for making toys, metal in particular, were limited. Parents would improvise and make toys for their children from wood or whatever material was available. Manufacturers even resorted to the unusual.

“I’ve collected numerous toys made from cardboard. I have a tractor made of pressed sawdust. I also have one made with cereal — cornflakes, I believe. You didn’t leave these toys outside as rain would quickly destroy them,” he said. “My granddad made me a train using wood. The wheels were made of thread spools. The cars were built from wood cheese boxes. And the engine was constructed from a round piece of wood. The engine included a smoke stack and a cow-catcher mounted on the front of the cab. Screen door hooks and eyes were used to connect the cars. In today’s world these toys look very crude, but they provided hours of fun when we were kids.”

The massive collection of toy treasures includes the old and the new, and various areas of specialty.

“There are so many toy tractors today. Many are small variations of a previous model. I can’t keep up so I collect the older ones from the 1970s and 1980s. When I find a model I like and it’s in rough shape, I’ll restore it,” he said. “If you’re a beginner, find a line you like and stick with it, one piece at a time. Talk to collectors who’ve been at it for a while because they can be helpful. I enjoy talking to the young people that come here on a tour. I hope some of my advice will help with their collecting. You can also get a lot of information from the ‘Toy Farmer’ magazine. I have a sizable library of tractor reference books that help a lot. When I attend farm toy shows or auctions I always learn something talking with other collectors.”

Tabor has had many hobbies through the years, but nothing that compares to his extensive collection of farm toys, and the associated memories and people.

“I’ve been involved in other hobbies. As a teenager I owned a stock car. I spent several years racing go-carts. Along came horse shows so that was interesting for a while. For a short time, I got involved in chain saw competitions. With our old antique tractors, we got into pulling events,” he said. “Now, I just play with my treasured toy tractors in my make believe sandbox. The people I meet through farm toy collecting are very special. It’s a wonderful hobby.”

Those would like to learn more about Tabor’s unique farm toy collection may contact him at 440-293-8023. Here are some photo highlights from his collection.