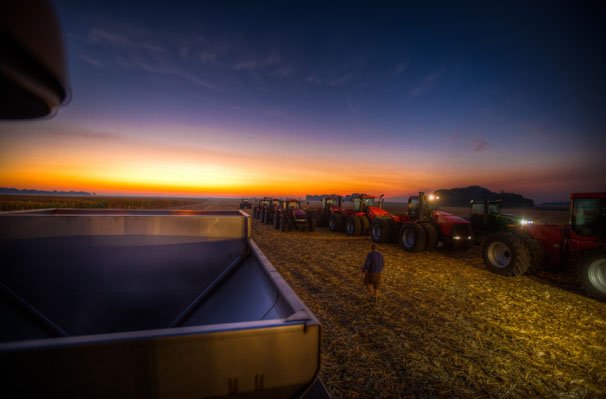 A farmer tribute inspires a photographer

I always appreciate good farm photography and I came across some great photos on the Internet the other day, with an even greater story behind them.

Matt Rubel, the photographer, was a “Navy kid” who traveled around the world with his family while he was growing up, but his mother’s side of the family is from a farming community in Illinois. He always had an interest in visiting the farm. Rubel grew up to (obviously) become a talented photographer who recently traveled back to his family’s farm for a visit. While there he was talking to his uncle, who was planning on moving some tractors. Rubel saw a great opportunity to get some tractor pictures, but what he found really caught his photographic eye and inspired him. Here is an excerpt from Rubel’s comments:

“A local farmer, Jake Moore, was arranging a tribute for his best friend, Kyle Hendrix (31), who had recently passed away from cancer. Kyle left behind a pretty young wife, two young children, and an entire community who thought the world of him.

“Jake’s original plan was to put 20 or so tractors along the road between the edge of Bement and the cemetery just outside of town.

“What began as a simple row of tractors became much more.

“The next morning I went with two other cousins to help line up what had now become over 60 pieces of farm equipment along the road. The sheer mass of steel began attracting attention throughout the morning as dozens of farmers moved tractors, trucks, spreaders and combines neatly along the roadside.

“In the middle of harvest time, to see such an outpouring of community support was staggering.  It was also telling to see every tractor, some of which may cost upwards of $400,000 was left with keys in the ignition. There was over $20 million dollars along that road and not one farmer spent a second worrying about where his tractor would be the next day.”

Rubel’s images are beautiful, but the subject of those pictures is even more inspiring. With so much not-so-good going on around the world (and in our own country) these days, it is certainly refreshing to see a simple act of kindness and sacrifice captured so skillfully by Rubel. I thought you might enjoy this too. More of Rubel’s photographs and complete comments can be found at modernfarmer.com.