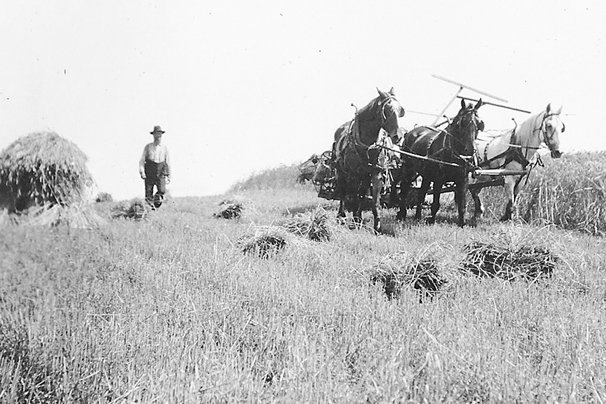 David P. Lash believes this photo is of his great grandfather David Powell Lash harvesting wheat with a team of horses. See the story at http://ocj.com/2012/06/century-farm-continuing-farming-heritage/.

Century Farm history less about “me” and more about “we”

I love to visit Century Farms each year for many reasons. There is usually fascinating history, there are always great family stories and there are generally some impressive historic structures to gawk at when you think about how they were built so long ago. Another reason Century Farm visits are so valuable is the perspective they provide.

It is so easy to get caught up in the busy schedule of today’s society. It seems that we have so much to do these days compared to those tales of yesteryear that are always so prevalent in my visits to Century Farms. Why is that? After years of learning about Ohio’s agricultural history, I continue to arrive at the same answer to that question: food.

Just a couple of generations back, whether they lived in the city or the country, people spent significantly more time and resources on food than we do today. In the subsequent years, our food system has evolved in a way that gives people what they most want — food that takes less time and less money.

I am reminded of this every time I sit and listen to tales told about Century Farms. The realities of the hard labor associated with the food production of our forefathers are illustrated in this quote from Bob Fagan, who I had the pleasure of talking with for a Century Farm story this spring:

“I remember vividly threshing time and butchering time. I used to drive the tractor that ran the binder for wheat harvest. I would shock wheat when I was 13 or 14. The steam engine went around to several farms. The young men in their 20s and older would man the wagons in the field that were pulled by horses. They would throw the wheat into the wagons that were at least four feet off the ground. When the wagon got full, they would be throwing the wheat sheaves into the wagon up about 12 feet high. They would pull the horses into the barnyard to the steam engine for threshing. They would leave a huge straw pile,” he said. “My aunts were all young women and they would break their backs making a fabulous dinner. The men had been working all day and they would come in hungry as bears.”

The butchering on farms was also a massive undertaking held in the middle of winter.

“They would butcher the hogs, placing the scraps in a big rendering kettle that sat over a roaring fire. They would skim the fat off and that would be the lard they used for cooking and making soap. The fire was also handy to warm ones hands, as it was cold out there. They would scrape the guts and turn them inside out to stuff for sausage. They would also use the stomachs for that. This was a major family affair and everyone had an assigned job,” Fagan said.

This type of physical labor for food is hard to fathom for most Americans today. They did not have time back when Fagan was a boy to be busy with sports, or events, or whatever else we fill our time with today because they were working from sun up until sun down to produce food. When they did get a break from work, they relished it and savored it as an occasional luxury. Free time was not expected; it was a privilege. Leisure was not an entitlement; it was something to be cherished. Life was not as much about “me” because, out of necessity, it had to be more about “we.”

As food has gotten easier, we have come to expect time to spend doing things we want to do, rather than provide or procure food. We don’t have to spend hours a day producing and preparing the food necessary for survival, so we do other stuff and then complain about how busy we are (myself included).The miracle of our modern food system has eliminated much of the misery of food production for most of our society, but it has also eliminated much of the harsh reality that grounded our forefathers.

The farm men and women of previous generations worked very hard every day in dangerous and uncomfortable conditions to produce food. They didn’t have time to be our kind of busy because they used more of their resources doing what was necessary to survive. Their leisure was sitting down for a few minutes to enjoy some homemade ice cream and conversation with their fellow workers after 14 hours of hard, hot labor on a summer day. Life may have been simpler, but it was definitely not easier.

Today’s society clearly has too much time to spend focused on the minutiae of perceived happiness — that is not something farm families had 100 years ago, and maybe they were better off for it. Maybe that is why they call them the good old days.