The fourth annual Ohio Grain Farmers Symposium was held on Thursday at the Roberts Centre and Holiday Inn in Wilmington. Grain farmers throughout the state had the opportunity to hear about the latest agricultural issues impacting their operations.

The Ohio Ag Net’s Ty Higgins was there with coverage provided by Leist Mercantile and talked to those that made presentations about topics ranging from climate change, the farm bill, weed management and the markets.

Matt Roberts is an Ag Economist with The Ohio State University and his message included to be aware that an “average” year in 2013 would have a negative impact on the markets. 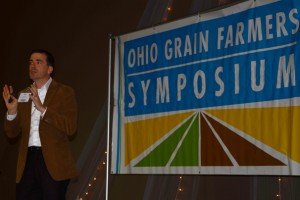 Beverly Paul with the American Soybean Association talked about the possibilities of a Farm Bill and why an extension this time around may not be the best option.

Is climate change real? Evelyn Browning-Garris is an historical climatologist and she gives her opinion.

According to weed scientist Ford Baldwin, Ohio farmers can learn a lot from farmers in the south when it comes to weed control.

Renewable Fuels Association President and CEO Bob Dineen says 2013 will offer many challenges for his industry.

Leist Mercantile’s Doug Tenney talks with Ty Higgins about the big USDA Supply and Demand Report coming out in early January and about the farm bill scenarios.

OGFSym Doug Tinney
Keith Summers with Leist Mercantile catches Ty up on upcoming crop insurance deadlines and changes in rates and policies for 2013.