Home / Livestock / Be wary at county fairs as H3N2V spreading

Be wary at county fairs as H3N2V spreading 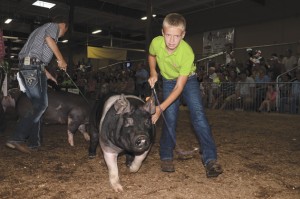 outreach plan to increase awareness of H3N2v at county fairs. A representative from ODA and ODH, or a local designee such as the fair veterinarian or health commissioner, will visit every fair to make in-person contact with swine exhibitors and reinforce the importance of preventing the spread of flu. As part of that outreach, ODA has set guidance for fair boards. Together, the agencies created an informational video for fairgoers and exhibitors: http://youtu.be/WBJsCcqscU0.

ODH has confirmed six additional cases of Influenza A variant H3N2 in Ohio. There are currently 36 cases of H3N2v statewide. At this time, surveillance indicates that the individuals most likely became ill with the flu virus after exposure to swine.

Those with confirmed cases of H3N2v are between the ages of 6 months and 36 years old. To date, one of the confirmed cases in Ohio was hospitalized, but they have since been treated and released. Health officials have not determined person to person transmission at this time, but continue to investigate the possibility.

With county fairs running into the first week of October in Ohio, ODA and ODH remind residents and visitors that fair attendance is safe. Those attending the fair should remember:

More information is available from ODH at: http://bit.ly/OhioH3N2vUpdates.