Dan Wagner farms in Hardin and Hancock Counties and started harvesting his wheat crop last week. He feared that both quality and yields would be poor this year. Though he is still disappointed with his wheat crop, it was not as bad as he initially feared.

“The wheat was off last year and this year the disease levels seem to be better, but the yields are worse,” Wagner said. “Wheat looked great coming into May, but then we started seeing the tile lines and I knew it was too wet. The water killed it in the low areas and in other places there was a head, but there was nothing in it. The yield monitor spiked up to 72 bushels in areas where it should’ve been 100.”

This year, fungicide again proved itself, but application at the proper time was also very challenging.

“We sprayed Prosaro, but I think we missed the ideal timing by about three days,” Wagner said. “I think if we could’ve sprayed a few days sooner, it would have made a big difference, but it was too wet. The weather was bad enough here that the planes couldn’t even fly a lot of days.”

The fungicide did seem to help, though, as vomitoxin levels were significantly below last year for Wagner. Jeff Reese, grain originator for Blanchard Valley Farmers Cooperative, has been seeing a similar trend with wheat quality and yields from around northwest Ohio.

“A lot of guys were very pessimistic this year looking out in the fields afraid that they were not going to have the yield or the quality they were hoping for. It seems like a lot of the quality we’re getting in is considerably better than last year. We don’t see nearly the shrunken kernels we had last year or the head scab. With head scab, last year we saw 5, 6 or 7 % damage and this year it seems to be less than 2% or 3%,” Reese said. “The flowering of the wheat happened a little later than last year and a lot of guys were able to get out and spray their wheat. That seems to have had a good impact on the wheat quality this year.”

Early on in wheat harvest, though, yield monitors were on the low side.

“Wheat in general is yielding lower this year. We’ve heard yields anywhere from 40 to 60 so far,” Reese said. “We have test weights averaging 56 or 59, so there is some relief out that that those numbers aren’t closer to 50.”

Around the state, early surveys were showing that wheat quality was better than last year as well. Ohio State Extension specialist and plant pathologist Pierce Paul estimated average scab incidence anywhere from 8% to 10% across the state, with less affected fields as low as 1% of heads impacted, and more severe cases ranging as high as 45 of 100 heads showing symptoms of scab. He said it is difficult to generalize for the state as a whole due to the wide range from least to most affected.

The most common diseases in Ohio fields this year included powdery mildew, Septoria, Stagonospora and a fairly significant appearance of head scab. But, Paul said, while the incidence of head scab is relatively high, it isn’t as bad as last year based on his field surveys 145 fields. Paul estimates that final wheat yields will range from 25 bushels per acre to as high as 90 around the state. 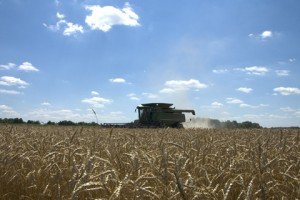