Wow! What a storm!

Wow! What a storm last night. For the first time since we have lived at our new home, we gathered up the kids and headed to the dank basement because of a possible tornado. It sounded fierce outside and we thought it would be best to take the safe option.

I do not know if there was a tornado here or not, but the morning light revealed quite a bit of damage. Two electric poles down from our house, the pole was snapped off about three feet up of the ground. The pole and electric line are out in the field.

We had four very large pine trees that uprooted and fell over, narrowly missing the house. We had countless pieces of slate blow off of our old roof. The wind shattered an old glass window in the barn and blew off part of the barn roof. There were also several places where siding had been blown off of our house. We also just got a new batch of baby meat chickens that are none too happy about the lack of heat lamps due to power outages. We are hoping they make it alright until we get power back on.

The damage was certainly not the best, but we all remained safe in our damp old basement. After a half hour or so from our trip to the basement, the winds died down significantly. We returned the kids to their beds and started inspecting some of the damage outside. The clean up effort will not be easy, but we still have everything that matters. 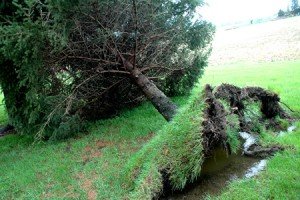 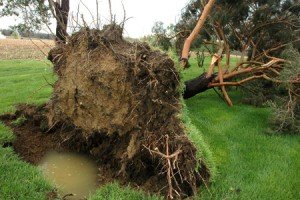