“To be honest, I quit checking the rain gauge. It really doesn’t matter because there is another rain coming behind it the next day it seems. It looks like it is going to rain all week. It is just wet.

“I’m not concerned yet. In ‘98 our best crops were planted between the 10th and the 17th of May and that was the best year we ever had. Every year is different. By looking at the trees around here, you’d think it was the first of April instead of almost the first of May.

I had one neighbor who drilled several fields of soybeans 10 days ago. Otherwise, nobody has done anything.

“Fortunately, we have a lot of tiled ground. I think that when it quits raining and if it is warm and windy (those days are coming) we could be in the fields in five or six days easy enough. We probably won’t have a spring. We’ll go right to summer. We’ll wake up and it will be 75 or 80 degrees and we’ll go right into planting corn. There won’t be any in between.

“We won’t change plans because of the weather at least until the middle of May. We switched from beans to corn a couple of weeks ago because of economics. We got the last of our chemicals in last week and got the last of the seed corn delivered. We’re waiting on some seed beans yet that are being treated with fungicides and Cruiser. With these high prices, we want to give it all the opportunity we can. We’ve been washing tractors and hauling a lot of corn for July delivery. We’re doing odd jobs — and they are starting to get a little bit odd now. We’re looking for some things to do now while we wait.”

“RAIN! I think I quit keeping track at about 3.5 inches last week. Nobody I know of has turned a wheel in the area. A little anhydrous got put on the last time it was dry, but that’s been just about it.

“I think we have a chance for rain every day through Wednesday and then maybe it will dry out after that. I‘d say even with warm temperatures and wind it would take at least five days for us to dry out. We’ve had a lot later starts than this, though. Right now we’re around the average starting time. We’re still all right. There are no worries yet. I think everybody is just going with the flow right now. When it’s time, we’ll go with the same plan. We’ll get out and spray before it gets quite fit to plant and then go and hit it. There’s nothing we can do about it. We just hope it doesn’t become June.”

The soil structure is likely handling the moisture a bit better due to improved organic matter and structure from poultry manure applications in the past. “We use a lot of poultry manure. We’ve been using it for about seven years. It is an even toss in terms of cost compared to commercial fertilizer, but we see a lot of added benefits to it.”

For now, though, it is just wet. “I am just looking out the window at a puddle in the field.”

“In the last two weeks we’ve had over 5 inches of rain. We got an inch last night and we had 1.9 inches between Friday and Saturday. We had a couple tornadoes in the area and that didn’t help matters any either. We got lucky right here because we didn’t have any damage. There were quite a few farms in the area that got hit. It took a big lean-to roof and peeled it right off. Another farm lost trees all around the house. The wind also damaged a few grains bins out in the area.”

With all of the moisture, there is little that can be done but wait. “We’re looking for work to do now, on account that we’re supposed to be in the field this time of year. We can’t even get the grass mowed. It depends on the wind and the sun when we could get back in the fields. The ground is so saturated. It is time to be planting and nothing is getting done.”

While the rain has slowed fieldwork, it has not slowed the weeds. “We’ve got weed pressure coming. They’re growing and we can’t do anything about it. We just have to wait and see what Mother Nature throws at us.”

“We’ve been getting rain, but I haven’t been doing a good job of keeping track of how much. It is definitely very soggy and it looks like it will stay that way for at least a few more days. Unless guys have umbrellas or something to keep their fields dry, they aren’t getting anything done.”

Amid all of the rain, there was a brief window for getting some fieldwork done. “We were able to get the rest of our wheat topdressed. We got some more manure hauled and we got 70 or 100 acres sprayed with Roundup. We got the heifer barn and steer cleaned out of manure. It looks like this year, if you get an opportunity you have to take it.”

Other than that, there has not been much to do in the fields other than watch the wheat. “The wheat crop still looks fairly good considering what it has been through. We’ll see what it looks like when things finally dry out. We have been working on some stuff in the shop. We decided to put anhydrous on our strip-till bar this year so we’re getting that all set up. We got the GPS equipment and set up our lime fertilizer spreader for variable rate here this year. We have to calibrate it yet once we can get out and spread some fertilizer.” 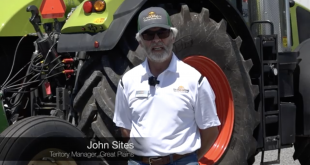 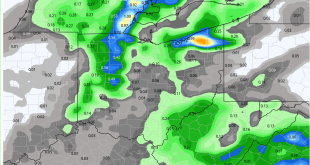 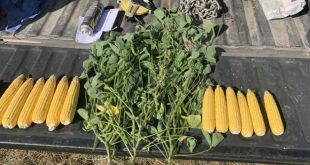 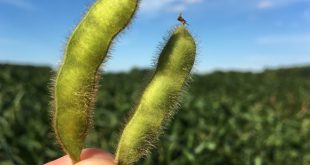