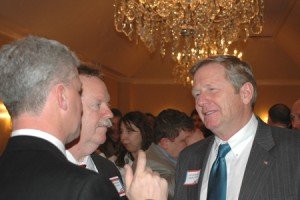 Ohio Agriculture Director Jim Zehringer and other Ohio Department of Agriculture (ODA) leaders discussed their plans to deal with an 8.8% budget cut in the coming year during a conference call held March 15 shortly after Gov. John Kasich announced his “Jobs Budget” proposal.

“We are going to be reduced in our general revenue funds by almost 9%, but we will continue to ensure the consumers of Ohio will have safe food,” Zehringer said. “The Ohio Department of Agriculture is about food, animal and plant safety, and there are a lot of companies in Ohio producing food. The one thing we never want them to do is have a recall or have someone get sick.”

ODA’s budget for Fiscal Year 2012 will be just under $48 million, with slightly more than $14 million of that coming from state General Revenue Funds. Federal funds, laboratory user fees and other sources make up the remainder of the budget.

Some changes will need to be made to ensure state resources are used in a responsible way, Zehringer said. One of those changes will be the elimination of ODA’s International Marketing Program, which had been in place about 11 years promoting Ohio agricultural products overseas.

“We will work with the Ohio Department of Development with those efforts,” he said.

The only program ODA is requesting additional state funds for is its regulatory Weights and Measures Division. The Division of Weights and Measures protects Ohio businesses and consumers by working with county and city weights and measures programs to test devices ranging from fuel meters and retail store scanners to vehicle and livestock scales for consistent measuring standards. In recent years, the budget for this division had dropped from about $1.1 million annually to $200,000, with about 80% of its staff laid off as ODA state funding was cut. As a result, the waiting period for companies to get accuracy tests done had ballooned to eight or nine months and beyond, said ODA Assistant Director Fred Shimp.

“Our Weights and Measures Program, when I came on in January, was woefully under funded,” Shimp said. “So, we will have additional General Revenue Funds that will be going into that program. We will be looking to bring Weights and Measures back to where it needs to be so we can run the program with integrity.”

The department is also planning to begin charging user fees of $75 per device for large capacity scales and large meters, such as vehicle scales, livestock scales, railway scales and meters of trucks delivering bulk fuel, to increase funding for the Weights and Measures Division, Shimp said.

“This would raise a little more than $400,000 for the program, and combined with GRF dollars would get the program back to a level we would consider adequate,” he said.

ODA plans to retain the Ohio Proud program, which promotes agricultural products produced by Ohio companies using Ohio materials. The department will not be able to market the program as much as it used to, but companies will still be able to join the program, Shimp said.

The Livestock Environmental Permitting Program (LEPP) will have its budget reduced by 17% through general funds, although an existing LEPP rotary fund should make funding for this program essentially neutral in the coming year, Zehringer said. The program has no plans to reduce staff, and will continue to maintain its current inspection schedule.

Some layoffs will likely occur, but no decisions on those will be made for several weeks. The number of potential layoffs could vary based on pending retirements and the possible elimination of some positions.

The Ohio Livestock Care Standards Board should not be impacted by budget cuts. The initial heavy work of the Board will be winding down this spring, with most of the care standards for the state’s livestock established. So, while there will be some costs for regular Board meetings, there should be no large overhead costs to maintain the efforts of the Board, the officials said.

ODA is also adding economic outreach to its core programs with the onset of its Ohio Means Agribusiness efforts.

“We will be looking for regulatory snags that could keep agribusinesses from moving here and will be aggressive in recruiting business,” said ODA Deputy Director Rocky Black. “So we think this will be a positive addition to the core programs.”

Overall, the ODA leaders remained positive, given the circumstances.

“It could have been a lot worse,” Zehringer said. “Facing an $8 billion budget shortfall, all of us have to do our part. We’re going to do the best we can do.”

Protecting Ohio consumers was stressed as the primary task that needed to be upheld.

“Healthy animals and plants for people to eat, and a safe and abundant food supply are mission No. 1, and we will be able to continue to do that under this budget,” Shimp said.

By Doug Tenney, Leist Mercantile Jan. 15 was supposed to be a big deal for …